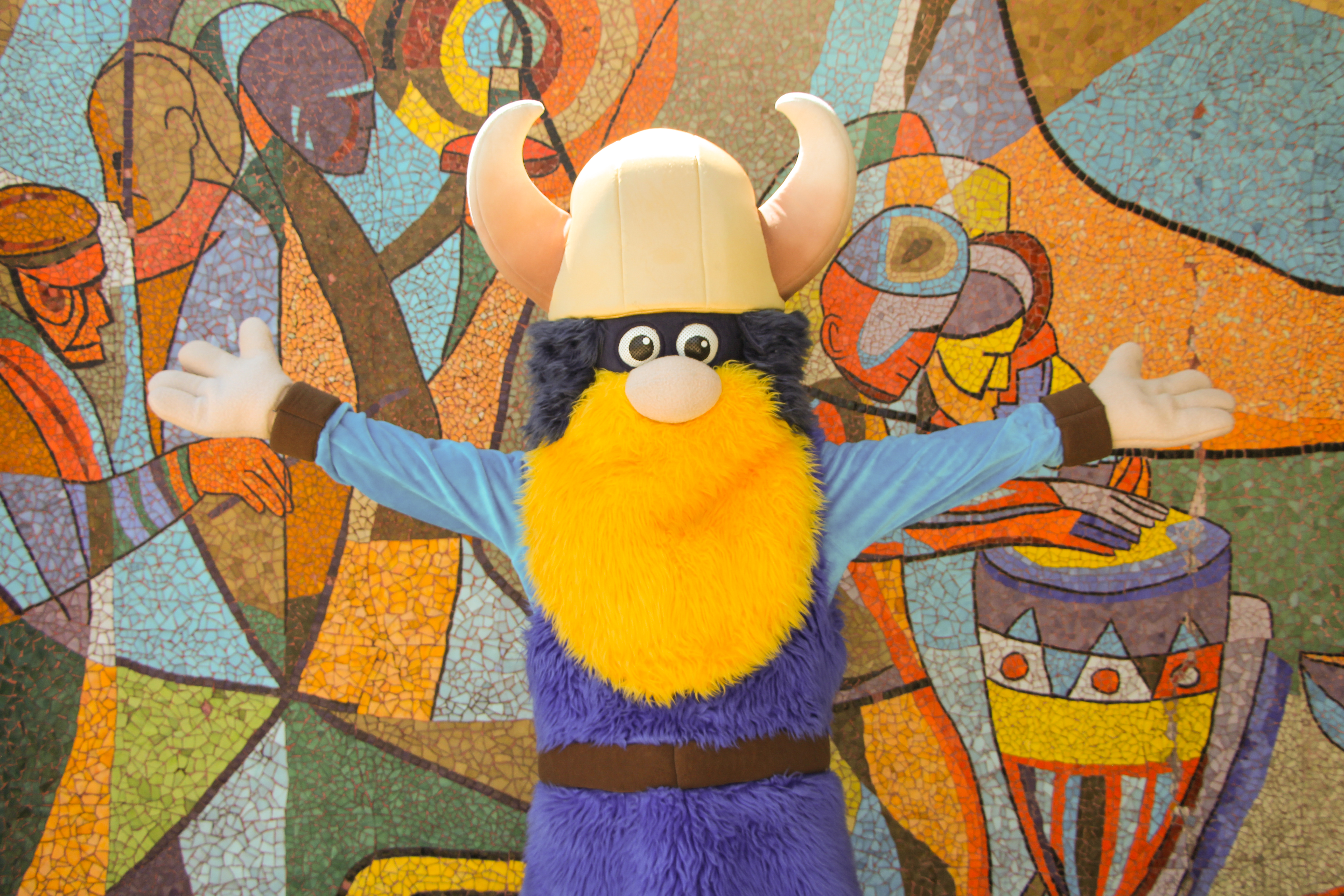 Being covered in blue fur, he slips on his gloves before putting on the head of Valdar the Viking. His vision is limited as he looks through a mesh viewpoint. All he can do is thrive off the energy he receives from the crowd and keep them engaged. Once he sees the first smile from the audience, his anxiety goes away, his energy is elevated and the unbearable heat is now the second thing on his mind.

Taylor Burke is representing Valdar the Viking, the mascot Del Mar embraced with a rebirth along with a furry-bearded costume that is played by Taylor, along with two other students.

The Viking has been the mascot of Del Mar for most of its 84-year history, but two years ago the school decided to go all in with a new mascot outfit along with a backstory.

Having only been the college mascot for two semesters, Taylor has proven his love for bringing energy to any event he is scheduled to cover. Even when taking pictures while dressed up, Taylor has a huge smile across his face.

He learned early on, from an audio failure at a pep rally, that he must be able to make sure the audience understands his non-verbal gestures while keeping them engaged.

Before pep rallies, Taylor, like other mascots and cheerleaders, attended a cheer camp to learn the rules of being a crowd-pleaser. He learned the basic ethics of being a mascot: you’re representing your school, you’re the face of it, remember your character and stay true to it.

During his senior year, Taylor was recognized as an All-American mascot at one of his many cheer competitions.

But being so full of energy, Taylor has gone through many tough situations. He and his older brother were in a car accident days before Taylor’s fifth birthday. They were both in the backseat when the collision happened. Unfortunately, his brother was wearing his seatbelt incorrectly.

“It left him in a wheelchair at the age of 9,” Taylor said. “I tend to only talk about the accident when I really need cathartic relief. Talking about the wreck is kind of hard, so I tend not to.”

Living in Rockport, his family was affected by Hurricane Harvey.

“I was homeless for a bit,” Taylor said.

Taylor and his family were thrown to the wind. His sister and younger brother went near the border with some family friends. He, along with his older brother, went to his grandparents in Troy, Texas. His parents stayed in town to help other residents.

Taylor and his family are still recovering to this day. Not being able to put their own house back together because they were too busy helping others, they eventually bought a new home.

“Right now, I’m in a mobile home that is parked on their property,” Taylor said. “I just want to be comfortable and not live in my car. Once hurricane season starts up though, I need to vacate that in case we need to evacuate again because I can’t be living in our escape vehicle.”

Taylor tries not to let the bad things he’s experienced define his life. When he noticed a flier at Del Mar searching for a mascot, he remembered the fun he had in high school and wanted to relive it.

“I walked up to Estevan and mentioned my award I won during my interview, and he jumped on it immediately,” Taylor said. “I didn’t really audition because he saw how big my energy was.”

Estevan Guerra, student life specialist and mascot trainer, used to be a Disney character at Disneyworld in 2013 before coming to Del Mar. Estevan says he looks for that extra “pixie dust” when looking for potential members for his Viking army.

Talking about Taylor’s energy, Estevan said he always goes above and beyond.

“Taylor is always excited and willing to give a show for the guests,” Estevan said. “He stays in character and plays the part tremendously. He honestly gives everything he has in any event he is part of.”

Since becoming Valdar, Taylor sees a difference from being Pierre, but still enjoys it.

“The character of Valdar is a little bit more shy,” Taylor said. “It is a lot more fun though because I have somebody running the show and knows what they are doing. In high school, I was the person to start and run the show. I was the only one who tried out, so I got stuck being in charge.”

Estevan does not put the students into a camp to become Valdar. Instead, he tells them about Valdar’s origin story. The backstory to Valdar is integral to his character, according to Taylor.

“There’s a personalized book that explains Valdar’s character and background,” Taylor said. “Estevan does an evaluation of us every now and then as well. He puts us in the costume for a bit and sees how it goes. He’s developing a procedure for it and you can see how much he cares about us.”

Taylor said with all his troubles, he still tries to see the brighter side of things. Being a mascot is a fantastic way to relieve his stress. When he is in the costume, he’s not thinking about his worries because he gets to see people happy and smiling for a genuine reason.

Taylor is always in character when he’s in the costume. He has learned to take any situation and make them fun somehow. Being one of the most liberating things he’s done, Taylor doesn’t want it to stop.

“The way people get excited to see a giant cartoonish character just adds a wonderfully whimsy to the whole experience,” Taylor said. “It’s uplifting knowing that even though I’ve been through tough times, experienced so much loss, and at times not been so carefree, I can still make myself and others smile and enjoy the moment they’re standing in.”