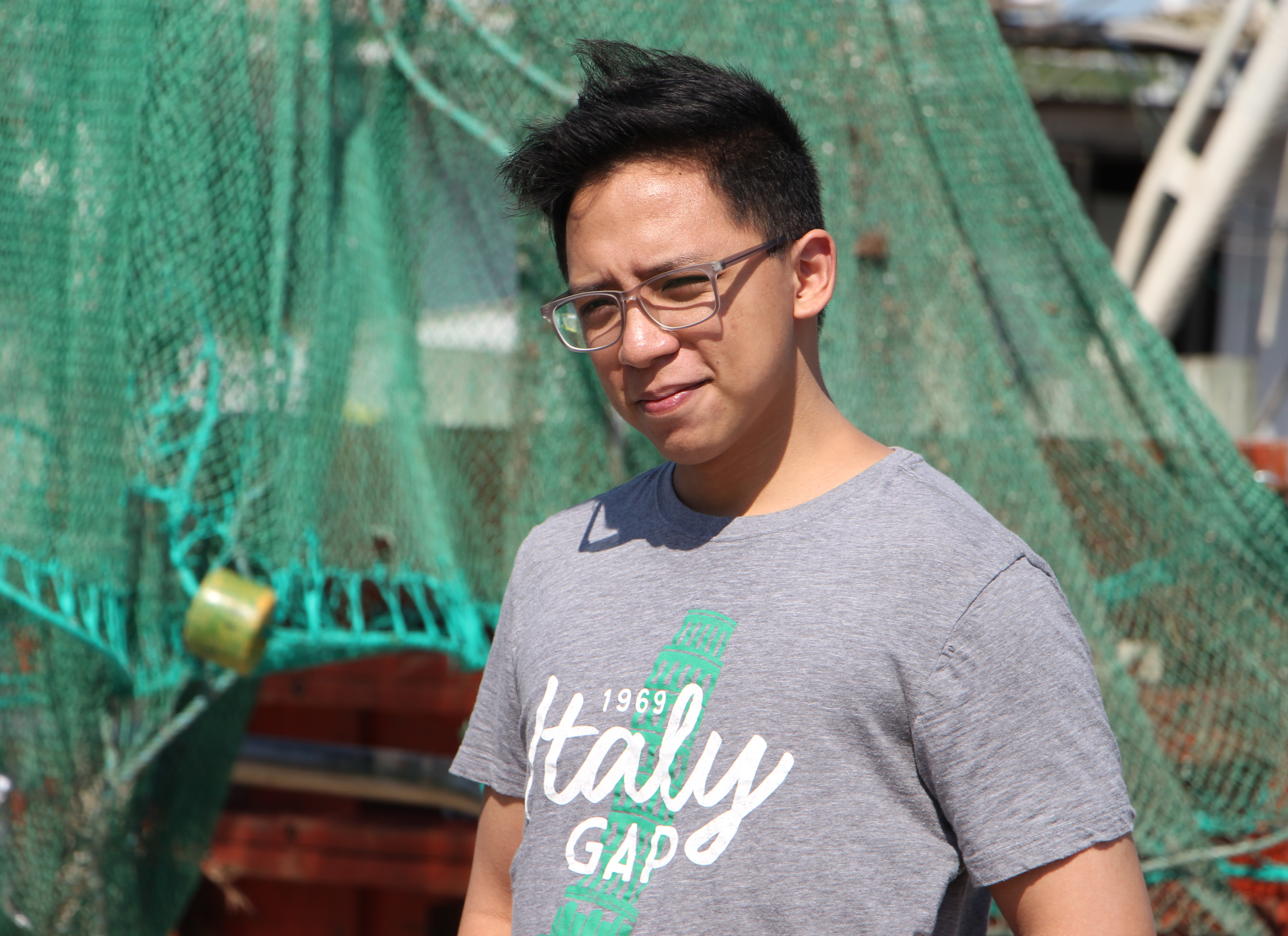 Reynard Eustaquio sits in the one-bedroom apartment he shares with his girlfriend. The room is nearly empty, containing only basic furniture. Several cats claw and stretch on his furniture while his girlfriend, Jana, attempts to make the Filipino dish sinigang but fails. Reynard shows Jana affection and offers to make a different Filipino dish “the correct way.”

Browsing on his computer, the 21-year-old looks at images his family sends him about an apartment complex he is thinking of purchasing. He also reads daily stories about the violent crackdown on drugs within the Philippines.

Having battled drugs himself at a young age he thinks back to when he was living in the Philippines. His bricked colored Nokia 2300 awakens the brothers at 4 a.m. on Saturdays. An 11-year-old Reynard and his younger brother, Reydin Reyes, get up before the sunrise to get ready for a 20-minute commute down to Manila Bay. Dressed in what little clothing they own and strolling barefoot, the brothers stick to their usual route and head out.

Manila Bay was notoriously known as one of the most polluted bays in the world.

The brothers took turns diving into the polluted waters searching for mussels on the seafloor.

Pushing their way through dead rats and floating garbage every dive into the filthy waters is a health risk. They would come out of the water covered in cuts from rusted metal pieces and glass.

“Whenever my brother and I get out of the water our hair is greasy and shiny. Sometimes you can see the chemical in the water,” Reynard said. “If our arms burn or feel unpleasant we just ended up putting ketchup on it. Everyone told us ketchup broke down the chemicals because of the tomatoes.”

The boys swam through raw sewage, dead animals and dangerous chemicals to collect the mussels.

The brothers head back inland and sell what they’ve collected to a local fish market. On a good day they earn around 200 pesos, approximately $2 in American currency.

This ritual was performed so the boys would have enough money to pay for food at school.

They had their mother, Bernadette Eustaquio, who was working in the medical field abroad in Italy. Bernadette would send her sons money to pay for rent and other utilities. Reynard would walk to the bank to collect transferred money, and was in charge of paying the bills and budgeting what was leftover.

“It’s unsafe knowing you’re a kid in a big city,” Reynard said. “If word ever gets out that you’re getting money from a parent abroad people will target and rob you.”

Back at home Reynard sits at his computer desk and looks at Philippine news media. Not much has changed since he left the country. It’s still dangerous to be out in the streets of Manila at night. Citizens’ bodies turn up the next morning either murdered or overdosed. The only connections police can make are drug-related crimes.

Philippine President Rodrigo Duterte has recently ordered the rehabilitation of Manila Bay, but still ignores the slaughtering of drug dealers, users and innocent people at night. The war on drugs and addiction is still high in the Philippines. The president declared any citizen the right to report or hunt anyone associated with drug dealing in exchange for money. This has not helped the country deal with the crisis.

Drug use is still abundant in America, but not on the same level as Manila. Reynard recalls a time when drugs impacted him and his brother in high school.

Reydin was the first to try acid and this intrigued Reynard. He wanted to see what the hype was but then soon started using other drugs as well. They wanted to get ahold of anything they could try and this led to a bad addiction. The brothers got into narcotics such as cocaine and methamphetamine to relieve themselves after a long day.

“There is a drug epidemic in the Philippines,” Reynard said. “I noticed that I was losing weight, getting tired a lot and not being productive. I couldn’t do the same things I was used to everyday, so I had to stop.”

Reynard felt troubled knowing his brother struggled kicking the habit so he would intentionally fistfight him to make it known it was time to stop. They kept each other in check until they finally decided to somewhat quit using.

Reynard recalls having a lot of friends while growing up in the slums.

“I had friends who got stuck with drugs and did a lot of stupid stuff that cost them their lives,” he said. “It’s because they didn’t have anyone, and they feel like no one is ever going to help them.”

Growing up in the Philippines was not easy for the brothers.

After constantly fist-fighting each other over addiction, Bernadette became concerned and decided to finally reveal to her sons that they were actually legal American citizens. She opened up to Reynard and told him he was born in Virginia and has an American biological father.

Reynard didn’t know how to react, but saw this as a new opportunity.

Bernadette pushed her sons to move to America with some family to give them the opportunity to live the American dream. She scheduled them a one-way flight to San Francisco to meet their siblings and her current husband. After a couple of months the brothers decided to move back to the Philippines to finish their education. Reynard would soon return to San Francisco once he had graduated high school.

Reynard was 17 when he made his official move. Thanks to American television he had learned some English.

After a couple of months the brothers decided to move south to downtown Los Angeles for six months. After both brothers were each working two jobs just to pay rent they decided L.A. was not for them.

They then decided to move to Corpus Christi.

“My brother and I don’t know why we chose Corpus as the city to move in,” Reynard said. “When we moved to Corpus we only had $1,000. We were at the airport and didn’t know where to say when suddenly this guy offered us a house to stay in. We stayed in that house for two weeks until we got our first paycheck.”

The salary at Stripes may not be enough for the average American to live and raise a family on, but for Reynard it’s enough to pay his expenses. He loves being able to take care of his mother and let her enjoy her retirement by paying her living expenses back home. He feels it’s the least he can do after everything she has done for him.

Recently Bernadette has started showing signs of dementia, as this disease has been proven hereditary within their family. Reydin has offered to move back and take care of their mother so Reynard can stay and continue progressing.

Reynard likes to live by a personal everyday quote.

“Even the darkest night can disappear in a dim light,” he said. “Even if you’re lost and only see problems ahead, you just have to look in another direction.”