An average of 20 students with physical disabilities are enrolled each semester, according to the Del Mar College Statistical Profile of 2017-18, and many face additional challenges on campus.

Catalina Clubb, a social work major, was born with cerebral palsy and has been in a wheelchair since she was born. Her biggest issue on campus is trying to get through doors.

“They are not wide enough,” Clubb said. “Also getting under desks is hard. I’ve talked to the Disability (Services) Office.”

Renee Hundley, a disability specialist at Del Mar, said whenever students have an issue with faulty equipment, they come to the office, which sends a request to maintenance to have it fixed. According to Hundley, it doesn’t happen very often.

“I know we didn’t have any incidents last semester, but about once every two semesters are when we have incidents happen,” Hundley said. “What I think might contribute to [the accessible doors] not working is when students press the door-opener. If you think about how many people with a physical disability are on campus, it’s not that many. I think they overuse it by hitting the button just because they can’t resist.”

Hundley said she thinks students are aware they can contact maintenance or the housekeepers on campus with any issues as well.

“A lot of our students are really good about self-advocating, which is a good thing,” Hundley said. “You want them to go out there and find that resolution and independence.”

According to federal law, all states must follow the Americans with Disabilities Act, or ADA, and Texas must follow the Texas Accessibility Standards, or TAS. The TAS has two sets: one from 1994 and the other from 2012.

J. Chris Tweddle, director of Environmental Health and Safety at Del Mar, said because of the two sets, it all depends on when each building was built to decide which guideline it must follow.

“We have ADA door openers on buildings, that are not required, but since they are there then they need to work,” Tweddle said. “All buildings need accessible doors near accessible routes. An accessible route is where your parking is, where curb ramps are, where the ramps to get into the building, and then the interior facilities. It consists of outside and your way to get inside.”

Both TAS guidelines are similar, according to Tweddle. However, if a building was built before 2012, it does not need to follow the 2012 requirements.

“But if you have renovations … there is a set figure that if your renovation goes above this amount, you have to bring up that renovation part up to the new codes,” Tweddle said. “For example, when Memorial Hall was constructed in the ’30s, these codes did not apply because they did not exist. When renovations occurred, then we had to meet those codes.”

Designs for new buildings at Del Mar College are reviewed by an ADA-registered accessibility specialist before construction. Tweddle said the specialist reviews them for ADA compliance before approving the blueprints.

The specialist also inspects the building after it is built. Any ADA deficiencies are corrected after construction, according to Tweddle.

“Our buildings have passed the ADA review and the ADA inspection,” Tweddle said. “For the operators on the exterior on the building, they are not required as long as the building meets the other ADA codes for accessibility. That all depends on the ramps and accessible routes. There are no requirements for an exterior door.”

Tweddle said there are requirements for interior doors, but not for exterior doors.

Interior doors are required to be opened with a maximum of five pounds of force. If a restroom door takes greater than five pounds to pull, then the ADA codes are put into effect and that’s when openers or other devices are needed. Tweddle said he is currently working on that with the facilities department.

“Our office goes around and does inventory,” Tweddle said. “We get the locations and from there I send that information to facilities for them to put on their inspections.”

Ivy Babbit, a social work major, has been in a wheelchair for the past five years and will be in one for the rest of her life. Her doctors don’t have a diagnosis for her yet, but she said her immune system is stuck in overdrive and attacks her brain and spine.

“That causes swelling throughout my central nervous system,” Babbit said. “That swelling messes with my nerves and doesn’t send the right signals to my legs. Think of MS.”

Getting around campus has proved difficult for Babbit. She said she has trouble getting up the ramps around campus because they are too steep for her.

“People always tell me to go to the Disability Services Office and that they will help me,” Babbit said. “I can’t take the classes I would like to take because if they are in different buildings. I can’t get there by myself. I asked them if there was some kind of program where I can get someone to help me to my classes. When it comes to getting around campus or building to building, they said they couldn’t help me.”

The ADA law does not require personal attendants. If Del Mar were to offer such a program, it would be a courtesy act. According to Babbit, the Disability Services Office suggested she talk to the Student Government Association.

“We do suggest to students to check with SGA,” Hundley said. “They sometimes have student volunteers to help students with disabilities across campus. We also inform students with a pamphlet about community resources they can look for. If students are provided with Medicaid or Medicare, they can possibly qualify for a home health companion.

“These resources can help them get around campus,” Hundley said. “We throw out these suggestions to them and provide reasonable accommodations. As for personal attendants, if such a program existed at Del Mar, we would have to provide one for each student. Some students do have help from someone, but it’s not someone the Disability Services assigned to them.”

Hundley said many students ask for personal attendants, but not only to get around campus.

“For eating, going to the restroom and basic transportation from their home to Del Mar,” Hundley said of why some students seek assistance. “When we tell them ADA law does not require personal attendants for college students they get upset, which is understanding, and that’s when we offer a pamphlet covering community resources. For example, if a student had a limited range of motion, they couldn’t reach their backpack in class or needed assistance writing, we would provide them with a scribe, or notetaker, in class only.”

Not everyone in a wheelchair on campus goes to the Disability Service Office, Hundley said, but they are still trying to make their educational experience accommodating within reason.

“There is a wide range of disabilities that we cover, not just physical and mental; there are emotional disabilities and learning disabilities as well,” Hundley said. “We do our best to accommodate each student, but we are limited by law.” 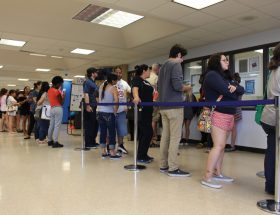