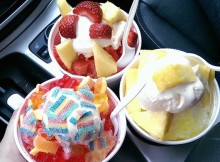 On February 5th, 2014 Corpus Christi was introduced to a new local business, the “drive-thru bar and grill,” Cool Sips. Sonia Silva, co-founder and partner with Michelle Burden have opened up a new drive-thru for drinks, food, alcoholic beverages, and snacks.

Silva has seen places in the Houston and San Antonio area that served alcoholic beverages through a drive thru, and wanted to bring the same idea to Corpus Christi. “Every place I researched and went to only catered to men,” said Silva. “They only served beer, but we are family friendly and offer something for anyone.”

Cool Sips is located on the corner of Airline and McArdle where the Nano’s Tacos once was. Silva and Burden chose this location for the area and drive-thru the property offered. “We had to find a place with a drive-thru,” said Silva “That was the most difficult part of the process until we saw Nano’s.” Silva and Burden had an agreement with Nano’s to share the property because Nano’s closed at 1 p.m every day. After Nano’s closed down unexpectedly, Nano’s became Cool Sips.

“We serve half-drink and half-snack and gourmet food,” said Silva. “We want to bring something else rather than hamburgers, hot dogs, and Frito Pies. We have a chicken alfredo burger and wraps.”

Just like anywhere else, Cool Sips has to check a valid form of I.D. to serve alcohol to someone. For Cool Sips to serve mixed alcoholic beverages and to get around the open container laws drinks have to be in a closed, sealed container. According to Silva, it’s the secret to their success. “The customers can’t pop a straw in their drink when they get down the road or they’ll get in trouble,” Silva said. “These drinks are meant to save for going to the beach, doing anything outside or just being at home.”

Cool Sips has only been open for over a month and has already surpassed Silva’s and Burden’s expectations of being a business. “We haven’t paid for any advertisement,” said Burden. “We have gotten through to the public by Twitter, Facebook and Instagram.” Cool Sips also offers a student discount with a valid student I.D. on non-alcoholic item. Cool Sips can be found on Twitter, Facebook and Instagram for all their daily drink and food specials, and also on their website www.coolsips.biz. Partners Silva and Burden are already looking into a second location and a franchise.