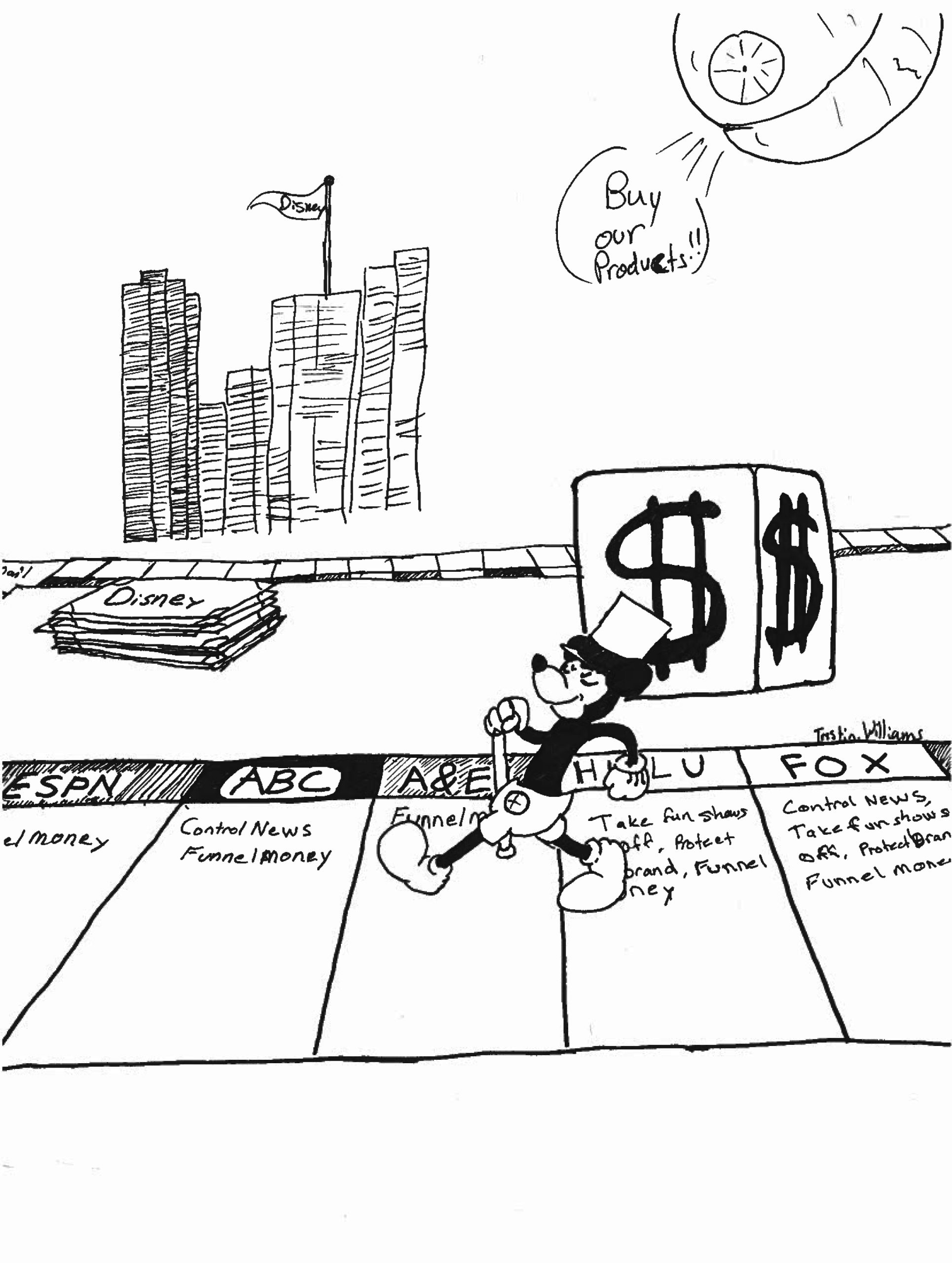 A&E, FOX, ABC, ESPN, The History Channel, Hulu and Vice — you hear those and probably don’t think of Mickey Mouse. But that’s what you’ll probably be thinking soon, with the Disney company purchasing many entertainment and media companies.

Disney has made purchases of these companies and their sister companies and has their roots dug deep into many other companies; not just movies either, they also own Hollywood Records, Synergy Group, GoPro and several news centers in ABC.

Let that sink in a minute. Disney now owns the news you watch or hear about, the music you listen to and energy companies.

Disney has slowly become colossal in the entertainment industry, with movies, online streaming and several television channels to their name, and with this much power, you have to ask where it all came from.

Way, way back, people didn’t have iPhones, iPads or streaming services, they only had books, such as “Cinderella,” “The Little Mermaid,” “Sleeping Beauty” and many more. These were the stories of authors such as Charles Perrault, Hans Christian Andersen and the brothers Grimm — not Disney writers, or Walt Disney. The only things Disney really created were Mickey Mouse, Donald Duck, Goofy and others, but even then they took those stories, made them into their own movies and characters, and now push and pay to have those characters be the ONLY versions of them.

For example, if you went on Amazon to buy a copy of the story “Cinderella,” you’d most definitely have popped up a Disney-made storybook, and even though it’s been over 28 years for these stories and characters they’re still under patent for Disney. Disney has continually paid to have their characters and stories remain theirs by paying to have public domain laws changed over and over.

Even the man behind it all, Walt Disney himself, wasn’t above shady or ill-willed tactics to go against the competition. In 1928, Disney actively discouraged reporters to keep them from mentioning Max Fleischer, the first animator who created a cartoon with sound. But Disney knew how to manipulate and use the media to sell his cartoons. This ended up destroying any chance for Fleischer to regain the recognition he rightly deserved.

Disney’s whole conglomerate of a company and slowly growing monopoly has made it almost impossible for any beginning business to compete against them. Making movies is hard enough as it is, but before Disney, you had a fair chance. Disney has created a system that unfairly gives them the advantage and the most payoff.

Disney should build a new system, not on a monopoly, but created around a system for investing or business on entrepreneurship, but mainly on movies and entertainment, it would become a gamble when it comes to any movie or entertainment product they choose to produce. But with as much money that they have accumulated, any drawbacks or movie flops wouldn’t be that big of a hit to the company. Or if they become worried about the brand, or social media outrage, they wouldn’t have to worry, they would have only financed the production.

This would allow for a greater diversity in content and would stop the cultural decay on entertainment. At for TV, they could make deals for different shows and have more channels and come and create something new and fresh while gaining a fair share of profits. Plus with a possible increase in profits per viewer, prices for TV service may begin to drop, allowing for an even greater increase of people being able to watch and afford TV, which would also lead to an increase of ratings and profit.