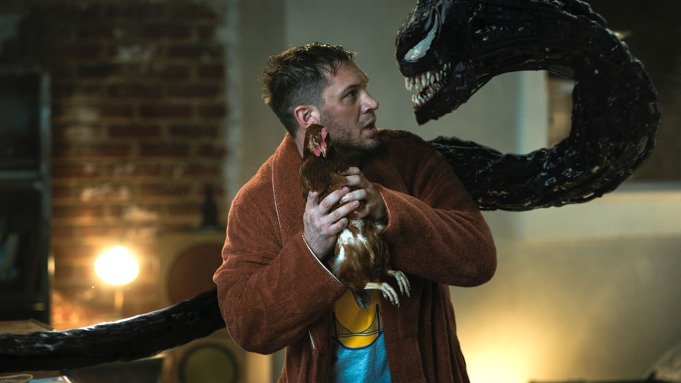 Eddie Brock and his symbiote make a comeback in their comedic sequel “Venom: Let there be Carnage.”

Brock (played by Tom Hardy) is still being investigated for the duo’s suspected crimes from the last film. Brock tries to keep Venom on a low profile, meaning no more decapitations till the heat is off, but he can’t seem to get through to him, causing a rift between the two just before we get to the main plot when Carnage wreaks havoc in San Francisco.

I enjoyed most aspects of this film, except for the constant relationship banter between many of the characters. You have Brock and Venom, who cannot seem to come to an agreement. We have Brock and Anne (Michelle Williams), where he and Venom can’t seem to get past their breakup. Anne and Dr. Dan’s (Reid Scott) relationship meets a new level through engagement. Then Cletus Kasady (Woody Harrelson) and Shriek (Naomie Harris) are driven a wedge by Carnage, another symbiote who cannot stand to hear Shriek defend Cletus.

With Detective Mulligan (Stephen Graham) and his ties to Brock and Shriek leading to the plot, it is a merry-go-round that has all these characters in a knot that brings them in for a battle royale. But the cherry on the top is the after-credit scene, which leaves the audience wanting more.

Hardy takes a more direct approach to his role in the film as a writer along with Kelly Marcel, who also took part in writing the screenplay for “Venom” (2018). While I had no clue that Hardy had more of a hand in this film before watching it, it had no bearing on my perspective after the fact. It was more of an interesting fact.

All in all, this movie will have viewers laughing and possibly questioning their own relationship status.