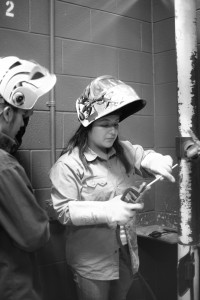 Tiffany Rivera, a 20-year-old Del Mar College welding graduate, is now a full-time instructor at the West Campus. The course was first offered to her as a sophomore at Ray High School, where this high school cheerleader would begin surprising just about everyone in the male-dominated welding industry.

“At the time I was the only girl in the program,” Rivera said.

When Rivera was a junior, she attended Robstown’s Annual Welding Show, where reporters had always made an appearance. After being noticed by a photographer from Caller-Times, Rivera found herself in the spotlight.

Shortly after, she was presented with a full scholarship to Del Mar from an anonymous donor.

“I never thought my parents were going to be able to put me through college, nor was I interested till this opportunity came along,” said Rivera, whose father is also a welder and nurtured her skills growing up. “I have already used the scholarship to get my associate and I’m now using it for my bachelor’s degree.”

It took Rivera just nine months to get her associate degree in December 2013. Just two weeks after, the college offered her the full-time welding instructor position.

“I welded in the morning, during the day and at night, so that I wouldn’t have to be in school long,” Rivera said. “I didn’t hesitate to accept the position when Del Mar offered me this job.”

Right now Rivera is living a very independent life, with a well-paying job that allows her to have her own apartment and a brand new truck. Rivera’s hardworking family never stops speaking about her success.

Always being the only girl, and being so young, Rivera has had to overcome many obstacles to be accepted into the industry. Sonny Vela, associate professor of Welding Applied Technology, said that at first during a night class full of military men, the students seemed to gravitate toward him, not knowing her abilities, but once she started welding it was a whole new ballgame.

“Don’t get me wrong, it’s one thing to be a great welder, but it’s another thing to teach, and she can teach,” Vela said.

Rivera knew she would face many challenges in such a male-dominated industry yet was undeterred.

“You really have to prove yourself as a woman welder,” Rivera said. “I have a few friends that have told me, ‘Don’t let your mouth do the talking, let your welding do it for you.’”

Overall, Rivera is satisfied with her career path she has chosen and says she has no idea what she would do without everything that Del Mar has provided for her.

“The instructors here care about their students and always try working with them,” Rivera said. “Don’t take what you have here for granted. I know I never did.”