Del Mar College Guy Watts called the college a “sea of mediocrity” that is swamped by “unprepared students” in an October letter to the editor in the Island Moon newspaper. His comments, especially a proposal to place the so-called unprepared students, or those in remedial and GED classes, on West Campus while “restoring the central campus as a center for academic excellence for prepared students,” were heavily contested at the December Board of Regents meeting.

Watts said, “prepared students” largely come from the more affluent areas of the city, including Padre Island, Flour Bluff and the Southside. He added that an an influx of poor immigrants is largely responsible for the large number of unprepared students, whom he said negatively impact the success of prepared students. He also accused the college of recruiting unprepared students for Pell Grant purposes.

Watts has since softened his stance. 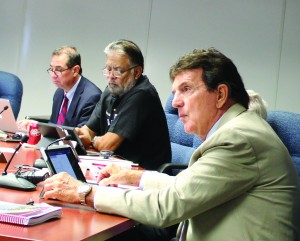 DMC President Mark Escamilla, Ph.D, defended the college in a December email to students, faculty and staff. “Because the article is incorrect and misguided in premise and conclusions, I would like to set the record straight,” Escamilla said in his email, which the Foghorn has posted on the website as “DMC president emphasizes college’s mission.”

Escamilla’s letter goes on to cover four major concerns that include clearing up claims of DMC being “swamped” by “unprepared” students, “a sea of mediocrity,” placing the “unprepared” in a separate facility, and college recruitment specifically for financial aid.

Escamilla in an interview with the Foghorn, sought to reassure all who may question the morality of the college because of Watt’s article. “Let me begin by stating Regent Guy Watts is entitled to his own opinion,” Escamilla said. “I was most offended by the notion to segregate in such a way that seperate people based on their racial or ethnic background and their level of attainment. I disagree that this college should be divided and set up based on capabilities because that is the opposite of where this college is going.”

“One can argue that students come for education as they are preparing for life,” Escamilla said.

Escamilla said DMC continues to welcome anyone with a dream.

“From my perspective,” Escamilla said, “every student that has the desire to learn, and the will to learn, and comes to this college, we will do everything we can to help them meet their goal and outcomes in life.”

In January, Watts restructured his original plan in a letter titled “Community Leaders Three Higher Education Goals 2015-2020.” He is proposing that the South Campus, now in the planning stages, be an academic campus for students wanting to take advanced courses in preparation for doctoral, professional and post-graduate research programs. Watts intends to maximize the education of these prepared students in hopes that they will be the “future leaders of our community.”

“What my focus is now, starting with this new letter is to recruit those bright students and get them on the Southside Academic Campus,” Watts said in an exclusive interview with the Foghorn on Jan. 20. “The remedial and GED students will remain on the East and West Campus. But the well-prepared, no matter what their background is, immigrant or not, need to go to the Southside Academic Campus.”

“My point is this,” Watts said, “if we take a class of all bright and well-prepared students, the professor can teach at that level, but if the class has some academically bright students and remedial students that are unprepared, then that professor has to bring down the teaching level and will need to slow down to accommodate the unprepared students. That causes academic degrading.”

Watts said he approves of the work done on the East and West campuses as far as vocational, occupational and training goes, but would like to see more focus on improving the quality of learning for the college’s brightest students.

“Don’t get me wrong,” Watts said, “I am thrilled what the president has done for the unprepared students. We have to continue to prepare these students. Once we have the prepared, we need to get them into the academic campus.”

If Watts’ proposal is approved, he plans to dedicate the next five years to finding these bright students and encouraging them to stay in Corpus Christi to attend DMC.

“Practically every elected official in this community went to DMC. Our graduates stayed in the community and became leaders, “ Watts said. “Nowadays, when we have bright students graduate from high school, we lose them all, but we notice when students DMC graduates become future leaders, and that is why we need to maximize their education.“

“Our students that we provide services to are those that are first-generation students, low income, or with documented disabilities,” Gilbert said. “And through the services we provide, our goal is to support those students who feel unprepared for the college atmosphere.”

Gilbert said many students have challenges occurring in their lives that discourage them from attending college, and that TRIO plays the role as a foundation of support for those seeking assistance.

“I would reassure students that they are welcomed here,” Gilbert said. “There are students attending that are from different walks of life, and each one of them matter.”

In the December Board of Regents meeting, the controversy was discussed during the public comment period. Members of the public shared several opinions with the board and addressed Watts directly at the time. With little comment from Watts, faculty and staff raged on about their disapproval of the article. Watts responded by requesting more time to review Escamilla’s letter, which Escamilla read at the meeting before sending via email, and to have time to respectfully address each question asked.

The matter was not discussed at the Regents’ January meeting. The Board of Regents is due to meet again at 1 p.m. March 3 in the Isensee Board Room, in the Harvin Center on East Campus.

“The bottom line is that the college will continue to carry out our mission,” Escamilla said, “and continue to make educational opportunities a reality for as many students that are willing to dream.”