This is a saying most know all too well. Some people argue that the actual weapon isn’t the problem, but the people carrying those weapons that are at fault.

We believe this saying to be true. Guns kill people, yes. But the person handling the gun is the one who pulls the trigger.

Should we take into consideration their background? Out of all the school shootings that have happened over the years, were those gun carriers licensed? 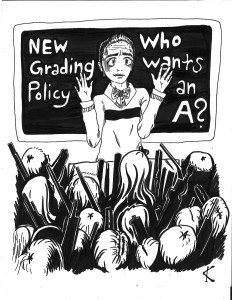 If students or faculty who had undergone background checks to get permits could have carried weapons on them, would so many lives have been sparred? It’s not a question we take lightly.

On Jan. 13, the Senate State Affairs Committee met to discuss a bill that would allow holders of concealed carry permits to bring their handguns anywhere on college campuses in Texas. After nine hours of testimony, the committee voted 7-2 to approve the bill, setting it up for a full state Senate vote this spring.

Many factors come into play when discussing the proposition of allowing a licensed gun owner to carry on our school campuses.

So the question stands, should guns be allowed on campus?

Many say no, but we think yes.

Yes, because we will feel more protected. We will know that a licensed gun owner will be there if a crisis happens.

Some argue that not all licensed gun owners know how to handle their firearm during a critical or dangerous moment. We do agree that not all people who own guns are fit to handle a gun during a high-stress situation, but that doesn’t mean they’re all uneducated.

Huffingtonpost.com states, “The author of the House proposal, Republican Allen Fletcher, said he was not trying to arm people so that they could be heroes during mass shootings on college campuses, but to protect themselves.”

We think that argument is completely legitimate. Who wouldn’t want to feel safe in any environment?