Two new bills regarding who can carry firearms have created much controversy in Austin and left many at Del Mar College split on the proposals.

The Senate State Affairs Committee held a meeting Jan. 13 in Austin to discuss passing a bill that would allow concealed handgun permit holders to carry their weapons on college campuses, and another bill allowing open carrying of firearms everywhere in Texas. Hundreds of protesters gathered in front of the State Capitol to protest and support the proposals.

The committee voted 7-2 to pass the bills. Lawmakers will determine the final fate of the bills this legislative session.

DMC student Marlyna Cunningham, a science and nursing major, said she is afraid to be around guns but is not opposed to having guns on campus. 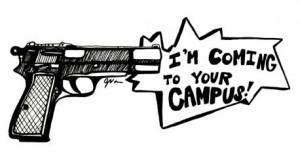 “I feel that if a mass shooter were to know that students can carry guns on campus, the less of a chance they will commit a horrific act,” Cunningham said.

James Klein, associate professor of history, said he is opposed to guns on campus.

“Colleges and universities are supposed to be a place where ideas are shared and exchanged freely,” Klein said. “I do worry that my teaching would change. When we have discussions I expect us to disagree. We are supposed to be encouraging students to disagree with one another and voice their opinion, but in order to do that civilly … I’m not sure guns on campus helps that. I think it dampers it.”

Klein said security would have a harder time identifying whom the shooter is if students are walking around with guns.

Currently, 1 in 4 campus police departments are not prepared to handle an active shooter, according to a recent survey by Campus Safety Magazine. Another 46 percent say they are understaffed. Almost half report they do not have enough lethal and non-lethal weapons or enough training to handle the weapons they do have.

Lauren White, DMC security coordinator, said that the Corpus Christi Police Department and off-duty police officers on campus are the ones who will assist if the campus were faced with a shooter. She added that those officers have been trained to handle the situation.

“Are we perfect? No, we are not perfect,” White said. “Working toward being more prepared? Yes, always. Security and the officers can be as prepared as we can possibly be, but if the students do not know what to do then we have a concerning unknown.”

Campus security provides videos on WebDMC that will help faculty and students to be aware of the behaviors of other students and how to react in emergency situations. The training videos are titled “Shots Fired” and “Campus Threat.” Security personnel also encourage all students to sign up for DMC Alerts, which will send a notification to their cell phones and email in the event of a shooter on campus or other emergency.