“Secrets and Lies” is a remake of an Australian television show of the same name. Ryan Phillippe, KaDee Strickland, Natalie Martinez, Dan Fogler and Juliette Lewis star in the American adaptation. The show’s original producers serve as the executive producers and ABC acquired the rights to the show in May 2014. It premiered its first two episodes on March 1, and the two-hour premiere reeled viewers in for sure.yan Phillippe and Juliette Lewis star in “Secrets and Lies,” the latest mystery-suspense show on ABC. The show has generated a lot of buzz since its two-hour premiere March 1. 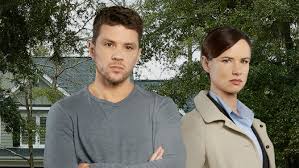 Ryan Phillippe and Juliette Lewis star in “Secrets and Lies,” the latest mystery-suspense show on ABC. The show has generated a lot of buzz since its two-hour premiere March 1.

Ben Crawford (Phillippe) discovers a boy’s dead body in the woods while jogging and he becomes a prime suspect in his murder. The media starts to stake out at his home, harassing him and his family, which catches the eye of detective Andrea Cornell (Lewis), who suspects Ben is responsible for the boy’s murder. So Ben takes it upon himself to find out who the real murderer is but in the process many secrets start to come out and things start to get sticky.

Phillippe really does a good performance in the show and shows he can act and is not in it because he’s just a “pretty boy.” You can follow his character as he’s trying to prove his innocence and you see the damage it does to him in the media, and with his family that makes you care about him. Lewis’ character, Cornell, is a good fit for her as you can tell whenever she’s on screen that she means business.

The back and forth between Lewis and Phillippe serves as one of the show’s tense moments as the show starts to kick into gear when they’re at each other’s throats. But it’s the show’s writing that keeps you glued to your television set wondering who did the deed and why. And it does a good job of making you think very carefully who the killer may be and not spoiling it right away.

“Secrets and Lies” is a suspenseful show with strong performances and writing, and is definitely worth tuning in Sunday nights. It airs at 8 p.m. Sundays on ABC, and previous episodes can be seen at ABC.com.