Del Mar College is continuing its tradition of hosting a series of poetry readings and open mic nights. The first one of the season took place on Sept. 24 and featured 2008 Texas Poet Laureate Larry D. Thomas.

Thomas, who shared excerpts from his new book, “As if Light Actually Matters,” during the event in the White Library, said he didn’t find poetry particularly fascinating until he was in college, at which point he felt he enjoyed it far more than he enjoyed prose. Before he really got into writing poetry, Thomas spent some time in the Navy as a prison counselor in Norfolk, Virginia, which led him to his post-naval career as a probation officer for 23 years.

“When I was in the Navy I just, out of the blue, literally, started writing poetry and never stopped,” he said with a smile. Thomas had a degree in English and had intended to teach, but ended up falling in love with poetry.

His first poem, he told the Foghorn during an interview, was unplanned.

“One evening, when I was in the service, my daughter was 2 and she said, ‘Daddy, let’s have a picnic,’” he said. Struck by the beautiful scenery, the colors, the sounds and the desire, all so overwhelming, he had to run inside and grab a notebook so he could write his first poem. 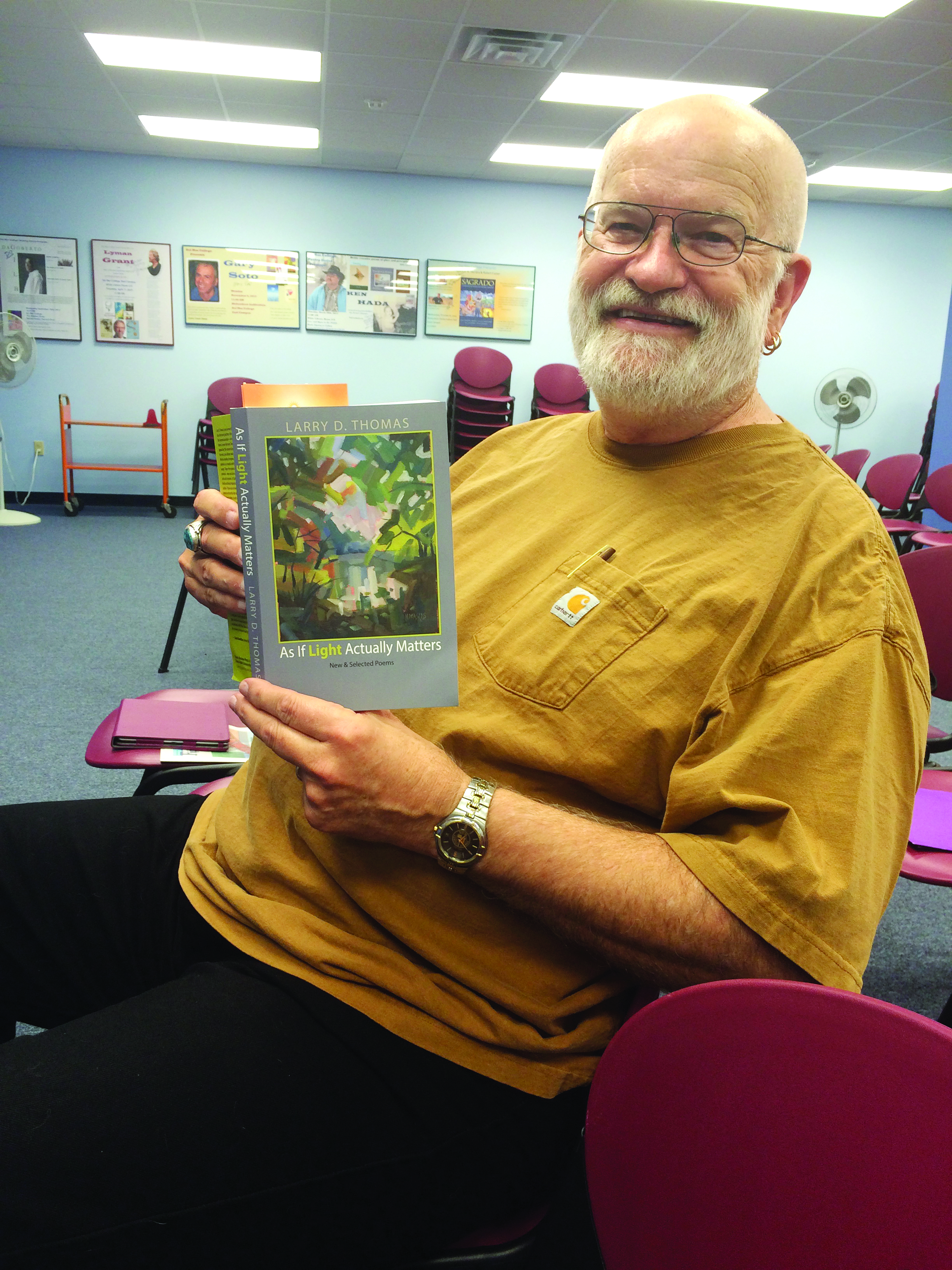 Larry D. Thomas shared excerpts from his new book, “As if Light Actually Matters,” during the open mic night in the White Library on Sept. 24.

“I didn’t even make a conscious decision to be a poet,” he said. “It just happened.”

The primary subject of his poetry is nature and the outdoors.

“Mama Nature informs at least 75 percent of my body of work,” said Thomas, who lives in Alpine, which has inspired several of his poems.

Thomas opened the night with a small portion from the end of his new book. Adorned with a beautiful piece of art on the cover, Thomas’ book is something of “greatest hits album” and really speaks to who he is as a poet.

“It’s really 40 years of writing condensed between two covers of a single book. It’s sort of the essence of my overall career,” Thomas said. The book contains poems from several of his previously published books, as well as 40 brand new, never-before-seen poems.

Professor Alan Berecka, a reference librarian at Del Mar College, started hosting the open mic nights last year. He said the events provide a wonderful opportunity for students to see real, successful writers reading their own work. He finds that the open mic nights have been important to not only the college, but the community as well, as almost all of the other open mic opportunities in Corpus Christi have died.

“There wasn’t a place for people to share their work. It’s hard to continue to write when you never get to share what you’re doing,” he said.

The open mic nights have given writers from around the area a place to read their work and receive encouragement from other writers, which Berecka said is very important.

“I was hoping to give students a place to come and share their work and meet more established writers who can be mentors and who can encourage them,” he said.

The Sept. 24 event was the first of four open mic nights taking place this semester in the White Library in Room 514. The next one will be Oct. 22, with Sr. Lou Ella Hickman as the featured poet. Open mic nights will also take place on Nov. 19 and Dec. 9, with the featured poets to be announced. All events will begin at 7 p.m.