Upbeat jazz filled the lobby where people mingled and had drinks from the cash bar at the opening reception. The people in attendance ranged from family of faculty to students. Many were there to support Kitty Dudics, who is taking part in her final Faculty Art Exhibition.

Dudics, a Del Mar instructor, is teaching oil painting classes this fall and in previous semesters has taught watercolor classes. She plans to retire in December.

Dudics has been on the Del Mar faculty for 34 years, since 1981. She received a master’s degree from the University of Texas-San Antonio in 1981 and taught for a while at Laredo Junior College before landing the job at Del Mar College.

Dudics has three oil-on-canvas pieces in the Joseph A. Cain Memorial Art Gallery, which are titled “Glissando,” “Crescendo (Sunset Over the Bay),” and “Prelude (Sunrise over the Bay).” “Crescendo” and “Prelude” are both views from Ocean Drive in Corpus Christi. They were done from photos she took because of the rapid changes in the color and lighting of sunsets and sunrises. “Glissando” is of a friend’s pond/river on a ranch in Bluntzer.

Dudics said she is “struck by atmosphere, by light, by time of day.” Her pieces showcase that. 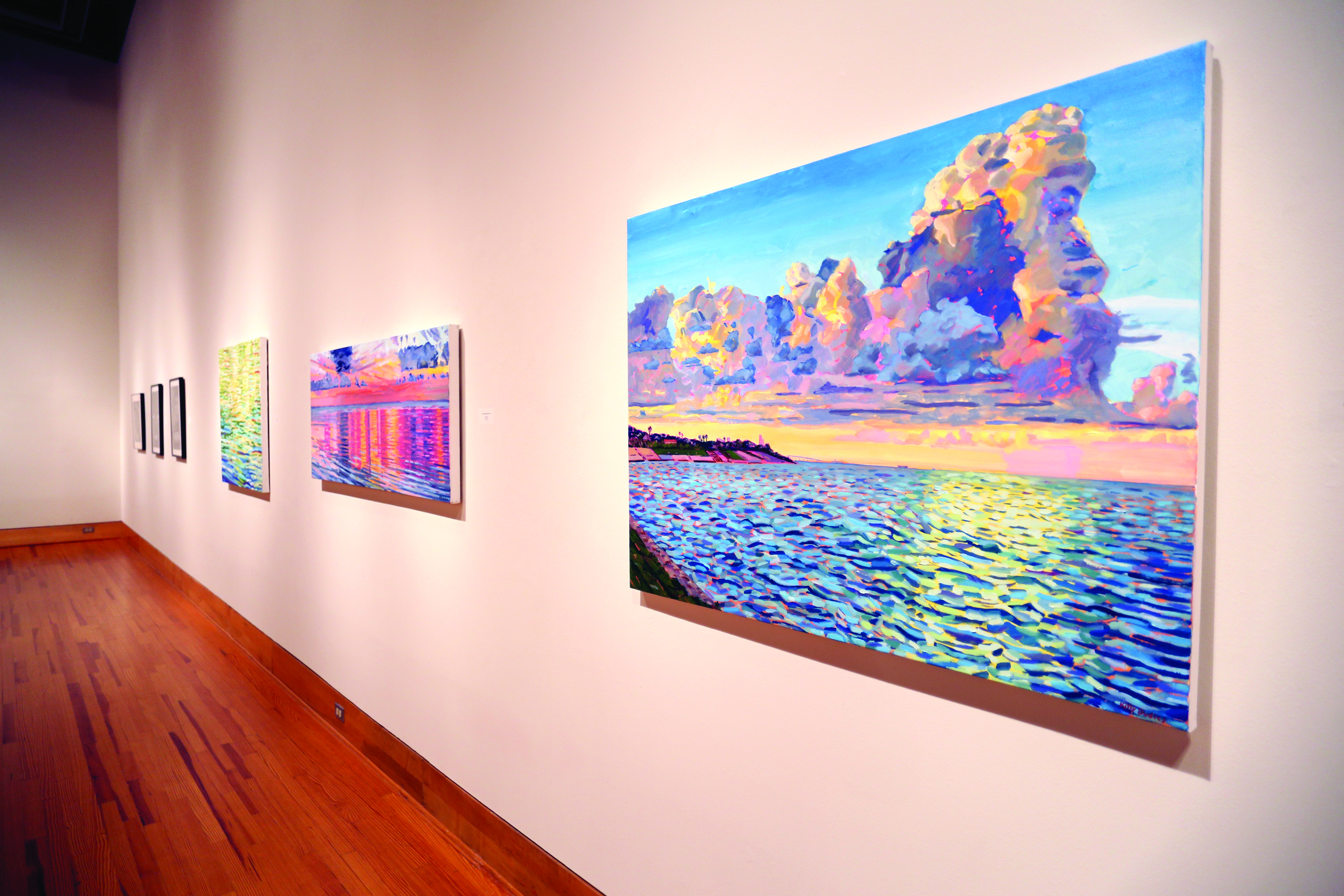 “Glissandro,” Cresendo (Sunset Over the Bay),” and Prelude (Sunrise Over the Bay),” by Del Mar instructor Kitty Dudics are on display in the Cain Memorial Art Gallery in the Fine Arts Building on Del Mar College’s East Campus.

Dudics has contributed not only to the Del Mar community but the Corpus Christi art community as well. The weekend of the art show opening, she planned to put a few finishing touches on a piece downtown. On the corner of Williams and Chaparral outside of the Executive Surfclub are some very large and old electrical boxes and the Marina Arts District has been paying to “beautify” old downtown. Dudics’ contribution is a painting to replicate bamboo. It’s a great way to bring free art to the community and update the old downtown.

After her retirement she plans on visiting her daughter in Virginia for a month and painting in a different landscape. She also plans to market her work more since she will have more time on her hands.

You can keep up with her work on www.kittydudicspainter.com.

Other pieces in the show include figure study pieces “Twist, Turn, and Large Version” by Randy Flowers, who has been on the Del Mar staff since 1974. Randy Flowers also set up the entire gallery. Flowers will be taking over the watercolor class after Dudics’ retirement this December.

Another contributor to the gallery is Amorette Garza with her Tchotchkes pieces. Featured are “Nativity,” “Deer,” “Dove,” “Bunny” and “Cat.” Garza finds small porcelain figurines and paints them to look skeletal. Tchotchke is Yiddish in origin and means “a small object that is decorative rather than strictly functional or a trinket.”