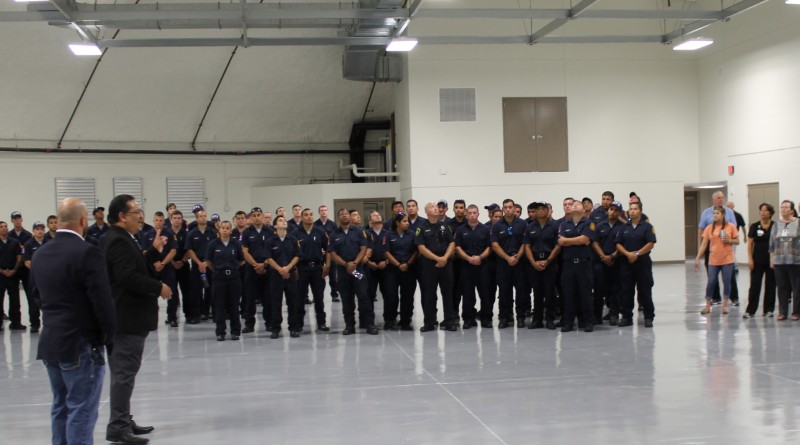 Fourteen years ago, a tornado tore through Del Mar’s West Campus, causing severe property damage to the campus and surrounding neighborhood, as well as taking the life of one person and causing multiple injuries. This devastating event got Del Mar officials wondering if there was a way to help protect more people and prevent anyone else from getting hurt because of severe weather. When it was suspected that Hurricane Ike would be coming to Corpus Christi in 2008, officials decided the best way to protect the students and faculty would be a structure that would be able to withstand the harsh weather that a hurricane or tornado could bring. Thus, the dome was born.

At the opening ceremony early Oct. 14, DMC President Mark Escamilla kicked off the event where he gave a history of the building and its uses. He was joined by members of the Del Mar Board of Regents as well as numerous city employees involved with the building and other invited guests.

Approved by the Board of Regents in July 2013, the building was built under budget with an almost $6 million price tag. Corpus Christi city officials cooperated with Del Mar to ensure that the building could perform at its maximum potential.

Shortly after unveiling the plaque and officially opening the building, a tour around the building was given to highlight the many uses it will have. With over 20,000 square feet and a 39-foot ceiling, the building can withstand 200 mph winds and can hold up to 800 people. Some 83 percent of the building is dedicated to safety, with the remaining rooms to be used for academic and planning purposes. Aside from emergency usage, the build will hold numerous classes for police, fire and occupational safety programs. The building will also allow kinesiology classes to be held at the campus for the first time.

Officials who participated in the building of the dome assured the crowd that the building was for “safety first” and that families around the area would be able to use the building in an emergency. With temperatures rising and the threat of dangerous weather becoming more apparent, this building is a vital step in making sure Corpus Christi residents and Del Mar students and faculty are going to be safe.