Although I have only known about At My Signal for a little over a year, the group has been together since 2011. I was drawn to them after seeing them perform at Zeros Hard Rock Club. They sounded amazing and really got the crowd moving.

I asked the guys where they wanted to meet for some Sunday morning tacos and they picked Taqueria El Altiño, across the street from Del Mar College’s East Campus.

I sat down with two members of the five-piece metal band, Joe Wilmot (vocals) and Gil Gomez (lead guitar). Cassie Trevino (guitar) was unable to join us because she was working. Philip Lee (drums) and Juan Hinojosa (bass) live out of town.

Tera: Tell me about some of your idols for writing.
Joe: For writing it varies. When it comes to writing it depends on what kind of mood I’m in … what kind of vibe I’m getting from the music. I like how Corey Taylor (Slipknot, Stone Sour) writes. Right now I listen to a lot of folk and Americana music. You wouldn’t think I listen to that because I’m screaming in a metal band but it’s what I listen to.
Gil: You get tired of listening to metal every time.
Joe: You get a little tired, yeah. But you know, you step away from it and it’s like man, you hear these different folk things and you get ideas from that and it translates differently for every musician. I hear all this and it just builds up ideas, which doesn’t make sense because it’s completely different but it helps me get ideas and makes me hungry again to make something new. That’s how I see it.

Tera: Having a girl in the band, are there things you can/can’t do?
Joe: We don’t make a lot of perverted jokes. If we do she usually does them first.
Gil: There’s nothing really different, it’s all the same.
Joe: We all love her like a sister. I tend to watch for her when we play late shows because we have drunk guys come up and talk to her. We all keep an eye out but there’s no big difference. She’s likes the sports we do, she likes the music we play. She brings a different aspect.
Gil: She does get a lot of attention though for being a girl.
Joe: There have been girls in metal bands before but they get dropped because girls aren’t very dominant in the metal world. It sucks to see some of these girls who want to do it and the guys in the band with them kick them out. Those guys are childish if they can’t handle a girl being better than them at something. I try to help bands out a lot. I’d rather have a scene that’s connected together. I hate that the scene is so clicky and everyone is kind of at each other’s throats.
The first few shows we played, we didn’t play with other metal bands because we didn’t know any of them. We had a rock band and a ska band play with us. Once we got a few metal bands to play with us though, they wouldn’t play unless their friend’s band played too and then once they were done the crowds left. It sucked because, you should support your other local bands too. It’s OK because I’m still going to play as hard as I would play if there were five people watching or 500. I don’t care. I’m still gonna go hard.
Gil: It’s difficult because there’s a trend and everyone jumps onto this trend. But that’s a whole different question in itself.

Tera: Well, tell me about the trend!
Joe: These younger guys follow the trend of the bands they love from CD to CD so it varies. The saddest thing I ever saw was another band who … they’re good kids, they’re good guys, they work hard … one of them posted on Facebook “new material that I really like but I don’t know if that’s something the scene locally would be about because it’s not what’s trending right now.” I was like, bro don’t ever follow the trend. If you wrote something and you love it then push that. Your fans are there because they want to see what else you can do. They don’t want to see what trend you can follow. He was scared of losing fans.
Gil: There’s been a lot of hardcore trending right now.

While we devoured our tacos, two older gentlemen walked into the restaurant with guitars and started playing music for the customers, giving the atmosphere an even better feel.

Tera: Trending locally or all around?
Joe: Locally. Hardcore is good but you have to pick and choose.
Gil: That’s why our following suffers because I try to stay away from the trend and be what I like. A lot of our stuff I don’t think is very hardcore-ish with open chugs and stuff.
Joe: Bands go for the hardcore, two-step style of music and then they try to put in some Christian influence into it because, as sad as it is some Christian metal band blew up as of recently, so some of these bands try to jump on the Jesus wagon and say, “OK let’s be Christian,” but they don’t have the first idea of what it is to be Christian. We’re not a Christian metal band per say but….
Gil: Some of us are Christian.
Joe: Yeah, some of us are Christian. I know Gil is. Me, I like the idea of religion but I don’t really follow specifically. I don’t mind though if he (Gil) gives me something that’s Christian related to sing.
Gil: A good example of that is our song “Ten-Ninety.”
Joe: “Ten-Ninety” has proverbs in it.
Gil: I try not to have a negative message.
Joe: We don’t curse at all in our music.
Gil: I didn’t want to be cursing every other word.
Joe: I look at big bands and they don’t do that. When I first joined the band Gil mentioned that he didn’t want a lot of cussing and I said no problem.
Gil: That’s an interesting fact about us.
Joe: We try to keep a good moral. My lyrics are a little darker but they have a positive influence behind it or it leads to something more positive. My favorite lyric song is “Ten-Ninety” because it’s based off of the idea that life gives you 10 percent of you know, the idea of life and with the rest of your life you have to build off of that.
Gil: The other 90.
Joe: Don’t let obstacles hold you back. Don’t let things slow you down. Overcome everything you can and build your life to the fullest.
Gil: What you do with your life is up to you.

The band stopped playing and one of the members went around to each table holding a tip jar. Joe quickly dug in his pocket for a couple of bucks and tossed it into the jar.
Gil: What was that for?
Joe: Supporting my local band bro.

Tera: Did you put that proverb in the song on purpose? Did you look it up and say, “I have to have this in the song”?
Gil: Yes, I looked it up and thought, this fits very well with what I’m writing right now.
Joe: He wrote most of the lyrics for the song. He wrote a good chunk of it and I just changed a few words here and there for structural reasons.
Gil: I was hesitant at first because of the whole biblical verse and he (Joe) doesn’t really go to church and stuff so I wasn’t sure how he was gonna take it but I figured he’d be alright with it.
Joe (talking to Gil): I mean, I have a Bible at home. I flip through it from time to time.
Gil: (chuckling) Yes, I know.
Joe: The whole little verse is, “Weakness can only strengthen me. The weak-hearted crumble fast. ‘But the righteous are as bold as a lion’ ” (Proverb 28:1). That’s one of my favorite lyrics from us. All of our songs have a deeper meaning.
Gil: Instead of talking about burgers and cheese like some bands.
Joe: Some of these bands talk about stupid stuff.
Gil: If someone were to read our lyrics, I hope that they could get a positive message from it and help them instead of being negative.

Tera: I feel like people usually associate negative things with this type of music.
Joe: They don’t give it the time of day.
Gil: They’re quick to judge. You’d be surprised how people judge us on our looks before we even play. We don’t dress in the whole black clothing thing.
Joe: I’ve gone on stage wearing polo shirts and dressy shirts, I don’t care. It’s whatever’s comfortable for us. 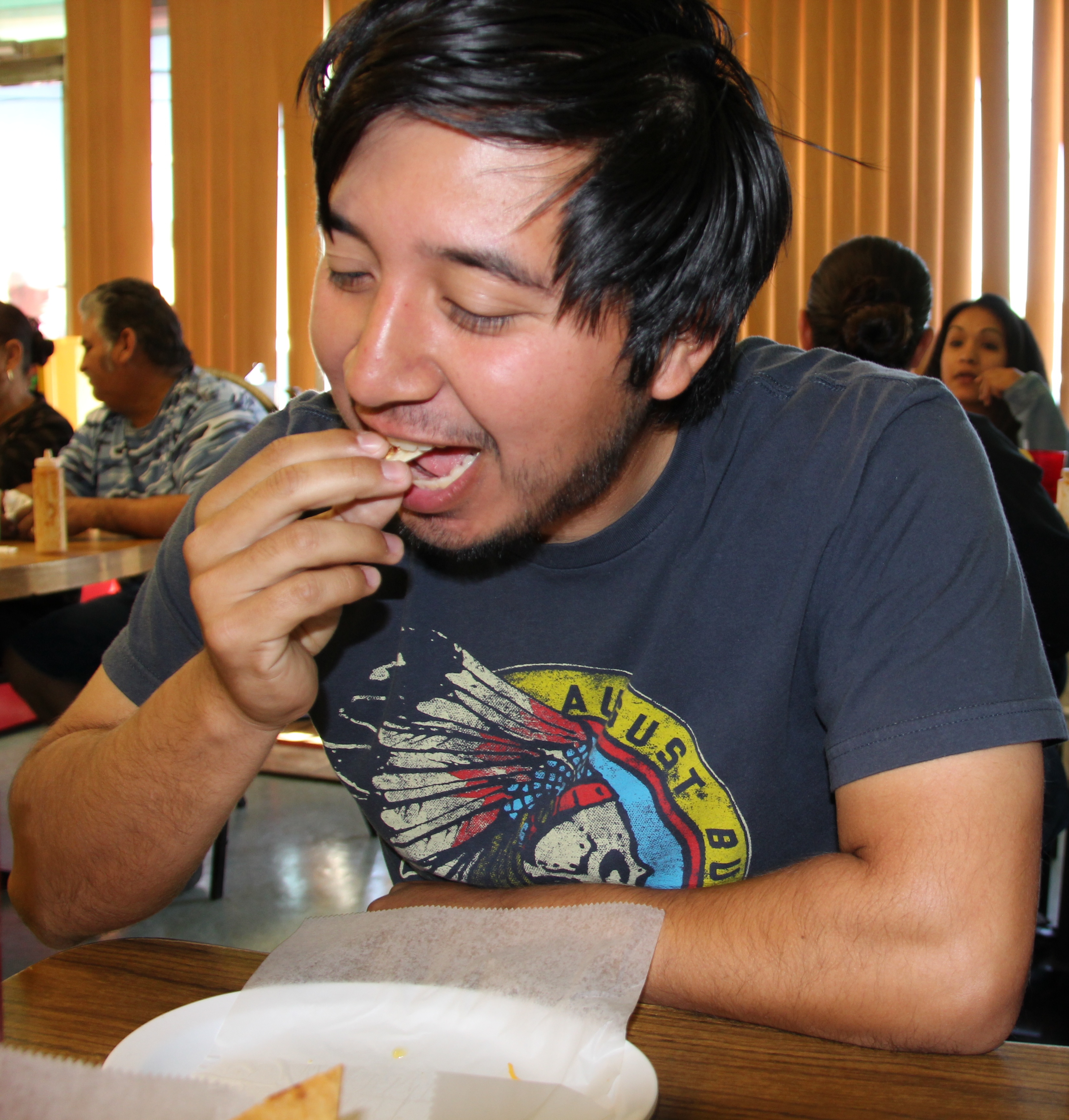 Tera: So guys, how’re the tacos?
Joe: Deeeeelicious.
Gil: They were good. I enjoyed it.
Joe: Told you it was a good restaurant.

At My Signal will be at The House of Rock on Feb. 16. alongside a smorgasbord of other bands for a show presented by Gorilla Music. For more information about the band visit facebook.com/atmysignal. 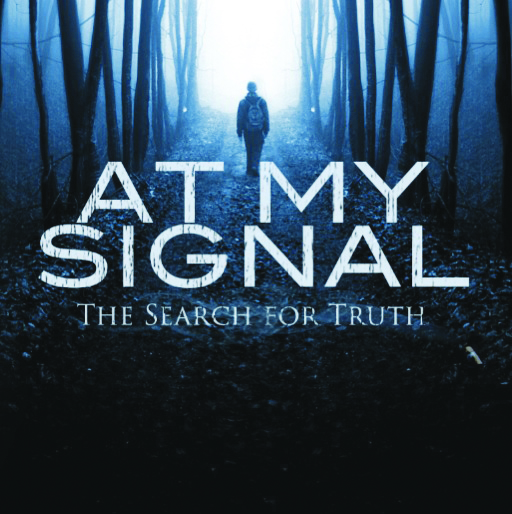 WHAT: EP release concert for At My Signal’s “The Search For Truth”
WHEN: 8:30 p.m. March 9
WHERE: House of Rock
COST: $7; proceeds benefit a friend of the band’s who is battling cancer.