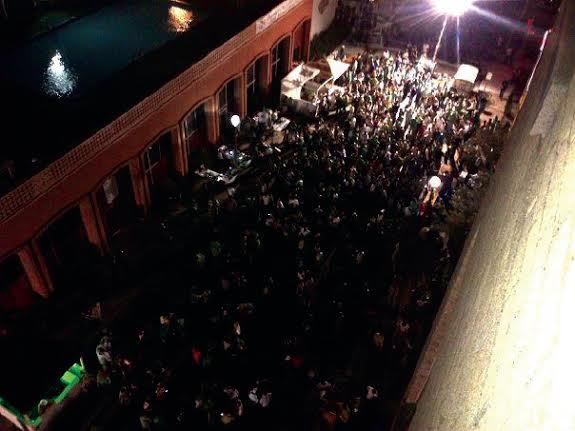 “It all started because, on St. Patrick’s Day, the pub would be at max capacity at 5 p.m. and we had to turn a lot of people away,” Treiber said. “That’s when I decided we needed to expand. We did, and now this year is going to be the biggest yet.“

Treiber, along with the Downtown Management District and sponsors such as Guinness and Jameson, are gearing up for another celebration featuring Irish culture and plenty of green beer to go around. To top the past two years, Treiber has extended the festival to two streets instead of one and added another stage and two satellite bars.

“There were so many great musicians that we wanted to play this year, so we decided to add another stage outside and stretch out the festival another block,” Treiber said.

Serving an assortment of appetizing food, vendors including Callie’s Cajun, The Grub Truck, Dave’s Grill and Harrison’s Landing will line the festival street. Numerous drink stations will be scattered down the two blocks, all serving the infamous green beer, along with other specialty beers.

There will also be plenty of musical entertainment featured at the two stages and inside the pub. Musical acts such as the Electrotypes, The Shakedown and Another Level will rock out. Irish Marching Band Water’s Edge also will make a guest appearance and the talented Irish dancers from the Glor Na Daire dance studio will perform traditional Irish dancing for festival goers.

Clarissa Serna, a local singer/songwriter who was recently seen on “The Voice,” also will perform.

A new “Irish Man of the Year” also will be announced at the festival. The tradition, which started last year, is an award given to a loyal patron of the pub. Last year, Rudy Elizondo went home with the award as the first “Irish Man” and is sad to see his reign end.

“I just have to say, I hope whoever wins this prestigious award buys me a car bomb,” Elizondo said.

So grab your kilts, green suspenders and four-leaf clovers and head out to the third annual Cassidy’s St. Patrick’s Day Block Festival on Saturday, March 15. The pub will open for business at noon, with outside festivities beginning at 4 p.m.