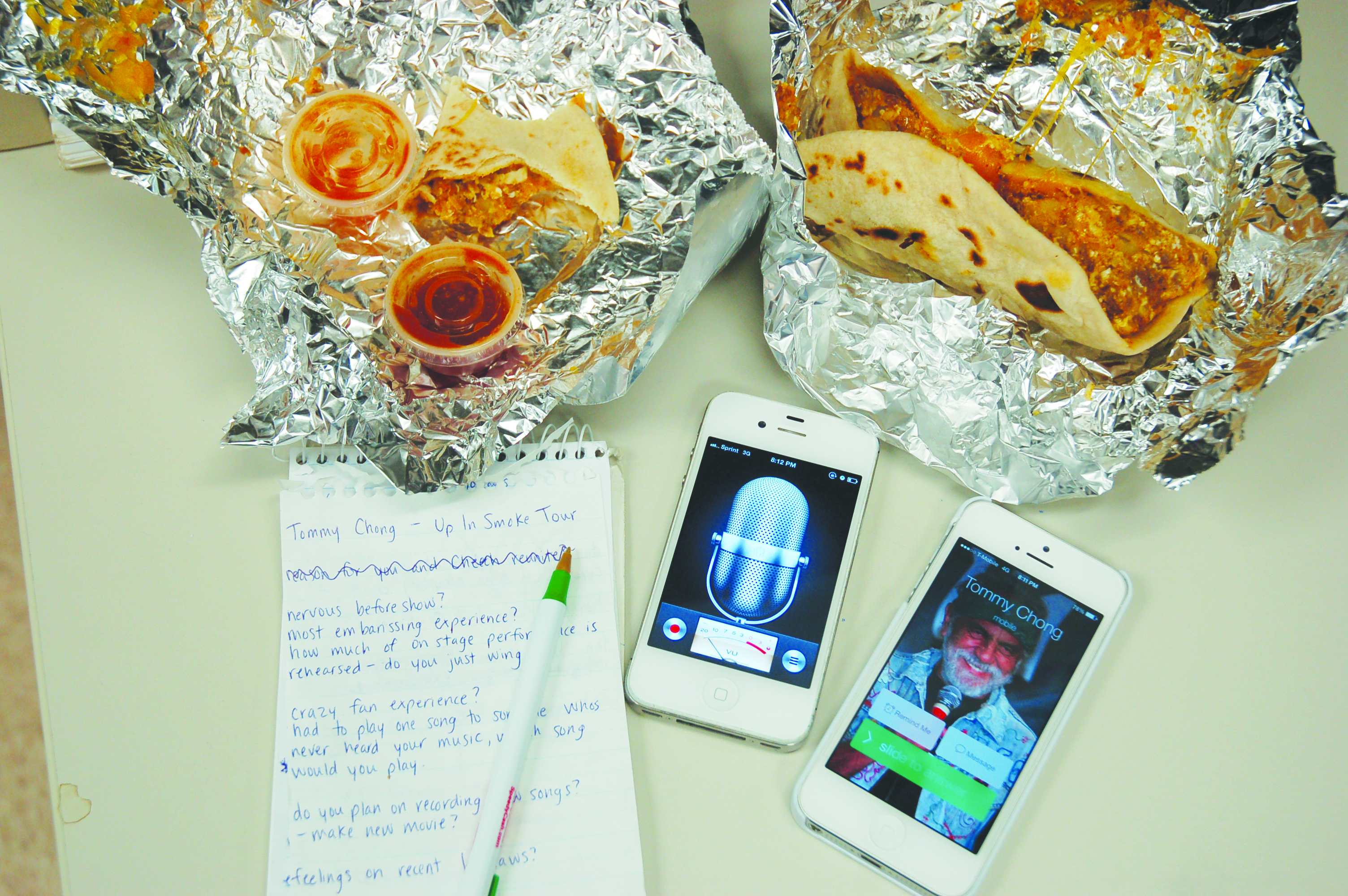 While I normally meet up with bands for good tacos and great conversation, I couldn’t pass up the chance to interview Tommy Chong over the phone. Chong, one half of famed comedy duo Cheech & Chong, was in L.A. but will visit Corpus Christi in April for the pair’s Up in Smoke comedy tour with the band WAR.

While no bong hits were involved in the making of this interview – at least on our part – he had us cracking up anyway.

Tera: Our first question is, where’s Cheech?
Chong: Good question. He’s actually too smart for everybody. I have to … his words … he’s university educated so I have to talk to the people. I know how to do that.
Tera: Well lucky us! We are very excited to be talking to you.
Chong: I’m glad you are because like I said, Cheech won’t talk to anybody.

Tera: Is the relationship between you and Cheech similar to the characters you play in the movies?
Chong: Yeah, it’s similar. I keep getting him in trouble.
Tera: Oh so you get him in trouble in real life too?
Chong: Yeah, I instigate and he has to suffer. Actually we’re … we get a lot of uh … you see Cheech and I, we’re like Siamese twins separated at birth. I know what he’s thinking before he even says it and he knows what I’m thinking before I say it so it works out pretty good.

Tera: This article is actually called “Tacos With Tera” and we usually eat tacos while we interview people so whenever you come to Texas call us up and we will buy you some tacos.
Chong: OK! I can eat chicken tacos. I’m off beef but I can eat chicken. Cheech loves everything. He loves food. He’s the food expert.
Kaliegh: We normally do breakfast tacos but we can do chicken tacos. We’d be down for chicken.
Chong: Yeah I’d like that.

Kaliegh: It seems like there’s a rise in the comedic performances where they’re using music at the same time like Demetri Martin and Bo Burnham. Is there any advice you would give to people coming up in that kind of field?
Chong: Just know your instrument. You can never learn enough music, ya know. Just study music. A lot of people just learn enough to get by and they miss out on a lot of stuff you know by not learning more and a lot of people use that as an excuse. “I’m not that good.” Well ya know, get good. I hate when people say “I’m not that good.” Well then why do you do it? Especially in music, you don’t get points for not being that good.

Tera: Is there a big difference between your favorite kind of music to play versus your favorite kind of music to listen to?
Chong: Yeah I listen to a lot of jazz. I love jazz and I can’t play it that well. I play blues and country. I love country. I’m a country guy.
Tera: Who’s your favorite artist?
Chong: Well I like old country. Not Taylor Swift stuff.
Kaliegh: Like Patsy Cline? Do you like Patsy Cline?
Chong: Oh I love Patsy. I love George Jones. Willie Nelson. I’m an old country guy.
Tera: You’re stealing Kaliegh’s heart right now.
Kaliegh: I love Patsy Cline.
Chong: Yeah isn’t she great?
Kaliegh: She’s amazing. She sings all the songs that I want to cry myself asleep to.
Chong: Yes, yes that was another thing. And you know Willie wrote a lot of her songs. “Crazy” that was one of Willie’s songs. “Craaaazy…” yep.

Kaliegh: That’s awesome. So before you guys get on stage do you still get nervous?
Chong: I thought you were gonna ask “Do you still get stoned?”
Kaliegh: Oh well OK do you still get stoned before the shows?
Chong: Yeeeeeeah! Calm our nerves.
Kaliegh: Well that’s an easy solution right there. How much of the on stage performance is rehearsed? Or is it pretty much all ad-libbed?
Chong: All of it.
Kaliegh: All of it is ad-libbed?
Chong: Yeah I don’t think Cheech and I ever rehearsed. We did rehearse with WAR and them but that’s the only time. I can’t think of another time where Cheech and I actually rehearsed. We talked and said OK we might do this bit or that bit but I can’t remember anytime we … no we never rehearsed. We always just went out and performed.
Tera: It’s actually kind of awesome that you ad-lib everything.
Chong: We kinda … yeah uh … it’s an improv method that we’ve done. We studied that where ya know you respond off of what the other guys says. Usually we’ll get a scenario … we used to perform in a club where the audience would shout out suggestions. Then we would take a half-hour break and write bits based on the suggestions. We’d say “You play this guy, I’ll play this guy,” and then we’d do it. But we never rehearsed. We just like … why bother. Just do it.

Tera: What’s different about touring now than when you first started?
Chong: Well we don’t share a hotel room like we used to. We each got our own hotel room.
Tera: Is that a good thing or a bad thing?
Chong: It’s well … it’s good because I got my wife who travels with me and I sure wouldn’t want to share a bed with my wife and Cheech.
Kaliegh: Are you sure?
Chong: Positive, unless we have no other choice. When we very first started it was tough because we didn’t have girlfriends and wives and without them we would have never have made it.
Tera: So thanks to the ladies you made it?
Chong: Yeah well what is it that you call a homeless … no … yeah I forgot that joke. But the girls always helped the poor musician. Oh yeah that’s the joke. What do you call a musician without a girlfriend? Homeless.
Tera and Kaliegh: Hahahahah!
Chong: Yeah that’s the joke.

Kaliegh: So do you think pot-based humor created a more accepting environment for y’alls performances?
Chong: Pot-based humor? Oh yeah. We can’t live without it.
Kaliegh: Would you encourage that people would enjoy your performances more if they were under the influence?
Chong: Absolutely. Well you know you gotta time it. You gotta time it right. Cause sometimes you get that powerful cut and you can’t even remember where you’re at. You’re in that coma stage and that’s not good for anything but yeah as long as you don’t do too much. Time your pot. Make sure that you don’t spend the show in the parking lot trying to figure out where the entrance of the club is.
Kaliegh: Gotcha. Time your pot, that’s good advice. Do you have a personal favorite strain?
Chong: My personal favorite strain used to be anything given to me by a naked woman.
Kaliegh: I don’t think I’ve had that yet but that sounds very interesting.

Tera: So how do you feel about the recent legalization laws they’ve been passing?
Chong: I love it! I think they should give Cheech and Chong a metal because we started that whole thing. Or actually we helped delay it. But we were right, they were wrong and na-na-na-na-na.
Kaliegh: We recently did an editorial about the legalization in Colorado and we we’re talking about how long it will take to trickle down. Is that something that you actually see happening nationwide?
Chong: Oh yeah absolutely, maybe not Texas you know. Texas has always been kind of weird. Texas is the only country I know that is populated by Mexicans run by white racist. It’s all economics ya know. And that’s why Texas has always been the slowest to respond. Just like you got that governor race now. That idiot, what’s his name?
Kaliegh: Rick Perry?
Chong: No, no, Ted Nugent. You have him and that other guy up against a woman and she’s behind in polls. Which is good because that’ll energize the Democrats to get out and vote a woman in. You guys need another woman, when you got Ann Richards you got a good thing going. That’s my political talk.

Kaliegh: Political talks with Chong, I like it. You guys have been here previously, is there any place that y’all visited before that you’re looking forward to visiting again?
Chong: I don’t remember a lot of places. We were gonna visit Padre Island last time but it got hit by a hurricane.
Tera: Well when you come back down we have to get tacos.
Chong: Definitely yeah well that’s Cheech’s department. He’s the eater of the family.

Tera: Do you and Cheech plan on recording anything new? Do you have any new projects coming up?
Chong: I don’t think we will be recording a record but we are working on an “Up In Smoke: 30 Years Later.” We’re working on a movie. It’s being written right now. Then we’re gonna do a series of movies until we’re too old to function. Then we’ll do some drugs and be embalmed. They’ll just wheel us out there and have voice-overs.

Tera: Thank you so much for talking to us.
Kaliegh: We hope to see you guys soon.
Chong: Yeah hey I’m looking forward to that taco!
Tera: Yes, please call us.
Chong: All right baby. We’ll see you when we get there. Bye.

Hang up the phone.