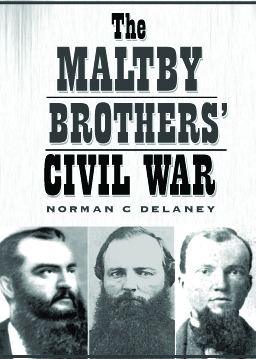 Unless one has delved into the local history archives of the La Retama Central Library or scoured the headstones of the Old Bayview Cemetery, the story of the Maltby brothers might be considered a lost chapter in Corpus Christi history.

For Norman C. Delaney, Ph.D., professor emeritus of Del Mar College — where he spent 40 years teaching history — the story was one that carried the unique angle he had been looking for and would spend years researching before releasing ”The Maltby Brothers’ Civil War” on Texas A&M University Press.

“I wanted to write something original and not a rehash of old material,” Delaney said. “There is so much human interest to the story, a family divided by war and, yet, remaining unfalteringly loyal to each other.”

According to Delaney, the idea to write the book came while studying about Corpus Christi at the time of the Civil War. He happened upon the story of one of the Maltby brothers who was in a local Confederate artillery battery and later learned the intricate situation involving all three: two (Henry and William) supported and fought for the Confederacy while the third (Jasper) sided with the Union for which he became a brigadier general.

The story of the Maltby brothers illustrated the idea of the Civil War as being one between the two brothers and, for Delaney, shed light on some of the dramatic complexities during the tumultuous period between the War and Reconstruction.

“The most incredible episode is when William Maltby, the Confederate artillery captain, is captured at Fort Semmes on Mustang Island (now Port Aransas) in November of 1863,” Delaney said, “brought to New Orleans as a prisoner, and when Jasper Maltby, his brother, learns of it, has him brought to Vicksburg where he is the commanding general.

“Imagine what the two would have talked about during the next several months, until William was finally exchanged.”

Delaney compiled his information by looking at the publications put out by the brothers, both before and after the war: Henry and William put out Ranchero in Corpus Christi in 1859, later to be republished solely by Henry in Matamoros and later Brownsville in 1870.

“The La Retama Central Library has these issues on microfilm,” Delaney said. “Many issues are difficult to read, but still provide a gold mine of information on local and state affairs, and Henry Maltby, himself, through his highly-opinionated editorials.”

Meanwhile, William Maltby left behind two publications that aided in the research, both in Corpus Christi: the Advertiser and later the Corpus Christi Free Press, which was the forerunner to the Caller-Times, according to Delaney.

“Other sources required a great deal of digging through old record,” Delaney said. “The La Retama Library has a website on the burials at the Old Bayview Cemetery which was very helpful. In fact, I dedicated my book to the four individuals who compiled the information.”

Delaney, who received his Ph.D. from Duke University, taught at Del Mar College from 1967 to 2006 as professor of history. He was honored in 2011 as Author of the Year by the U.S. Naval Institute. Since retirement, he has put out numerous articles in publications, such as Naval History, and is already at work on his next book — the story of a Union soldier killed at Cold Harbor, Va., in 1864.

“I was engaged in research and writing during all the years I was at Del Mar,” Delaney said. “It’s nice to have more time to spend doing this, but I miss teaching. Teaching is sharing one’s knowledge in a real life situation, and I loved teaching more than anything.”

“The Maltby Brothers’ Civil War” is out now on Texas A&M University Press.

One thought on “Rediscovering our region’s history”