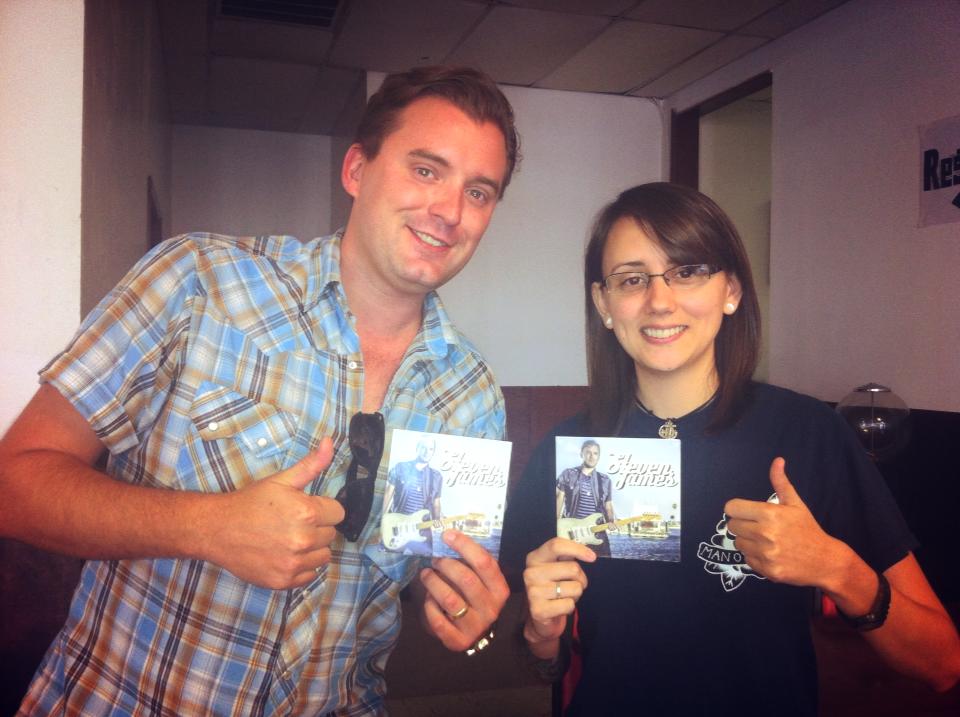 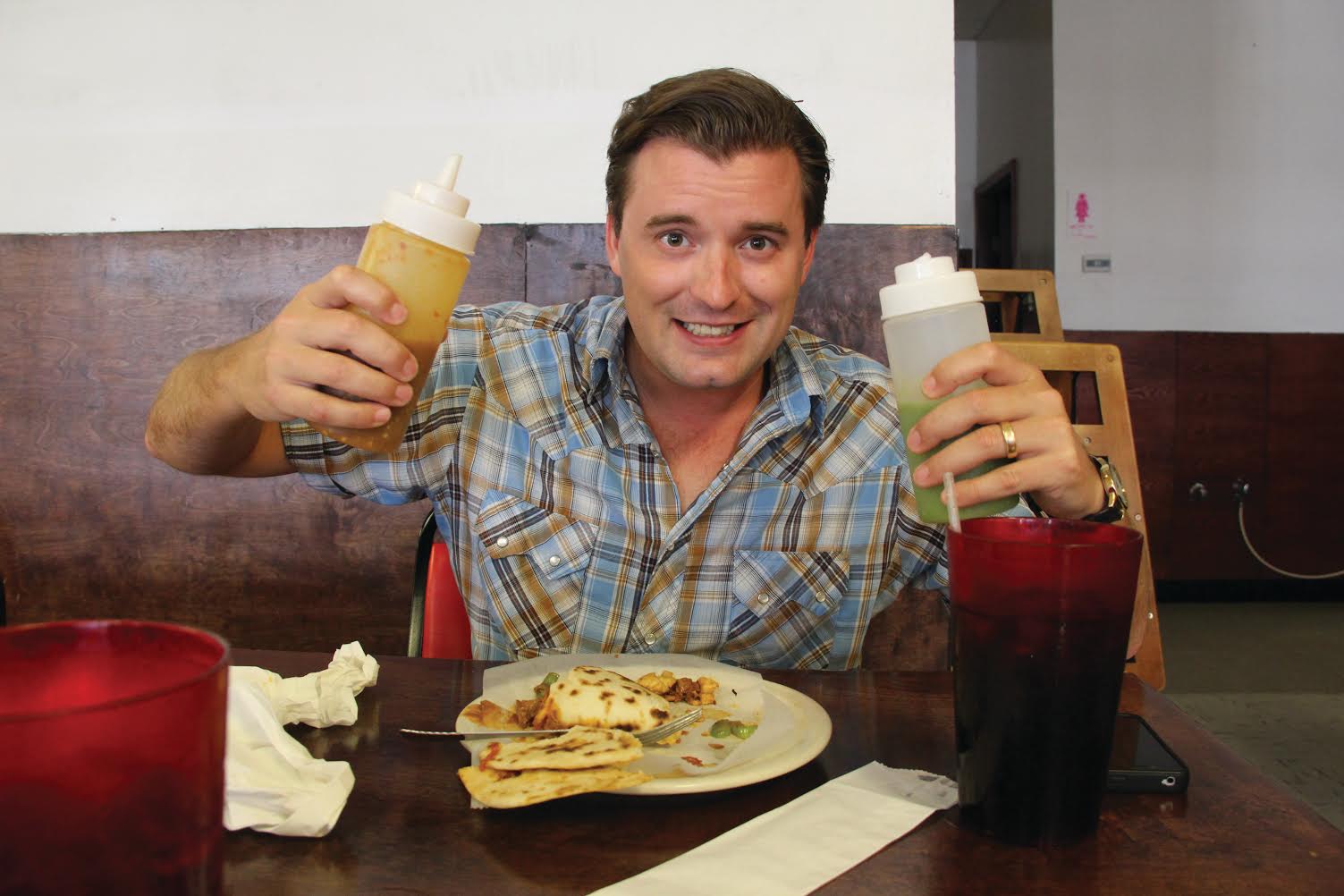 A new semester means new artists to interview and new tacos to devour. I met with local musician Steven James for lunch at Taqueria Almeida. He shook my hand and gave me two copies of his self-titled CD with two new songs, “Best of Your Love” and “Go Down Slow.” Throughout my TWT career I’ve never been given a copy of the artist’s music so I immediately liked him.

Tera: So, how was recording solo versus recording with a band?
Steven: It was fun; it was cool. I don’t know if you know my story but I went to college in Austin. I went to St. Edward’s and I had a band while I was there so I got in touch with my old producer and in the beginning of June I recorded with him. I did every instrument except for the drums. I had this awesome session drummer play with me but I did everything else. It’s been awhile since I’ve done that. Played bass, organ, everything. In The Shakedown, my band, I had other guys backing me up.

Tera: Do you prefer being solo or do you like the band?
Steven: It’s two different worlds, two different beasts. Solo I’m more in control and I get to be in charge of everything but I do miss The Shakedown and bouncing ideas off the other guys.

On Sept. 28 I’m going to be in West Hollywood at this place called Room 5 Lounge. I’m going to be opening up for my friends’ band Smoking Suns. (leans into mic)  They’re a really cool band if you haven’t checked them out.
My plan is to go to Texas, Nashville and L.A. every couple of months.

Tera: What made you want to be a solo act?
Steven: Well we, The Shakedown, released our debut album last fall with Dylan Ely of Loop Studio so we toured Texas and promoted that album. Our drummer left because his wife had a second baby, my bass player left because his girlfriend had a baby, and our manager was on tour in Europe for three months so I was kind of on my own already. I had all these songs that I had been writing in my free time and the sounds not quite The Shakedown. The Shakedown is hard rock like Black Keys, Kings of Leon. My stuff is a little more, I don’t want to say country because I don’t sing with a twang or anything but it’s like, acoustic Kings of Leon.

So I had these songs and I found myself alone anyways and thought, “Well you know what, I’m just gonna lay these tracks down while I have the time.” I put the first two songs out and the reception was crazy. I’ve gotten articles in all these Texas country online blogs and magazines and stuff. I just didn’t expect such a great reception. I’m heading to Austin and into the studio the weekend I get back from L.A. I want to get a full EP together.

Tera: I actually interviewed Clarissa Serna at Loop Studios a few months ago.
Steven: Yeah I read that. She’s my homegirl. She’s actually going to be in L.A. when I’m there so I’m gonna try to get her on stage with me. 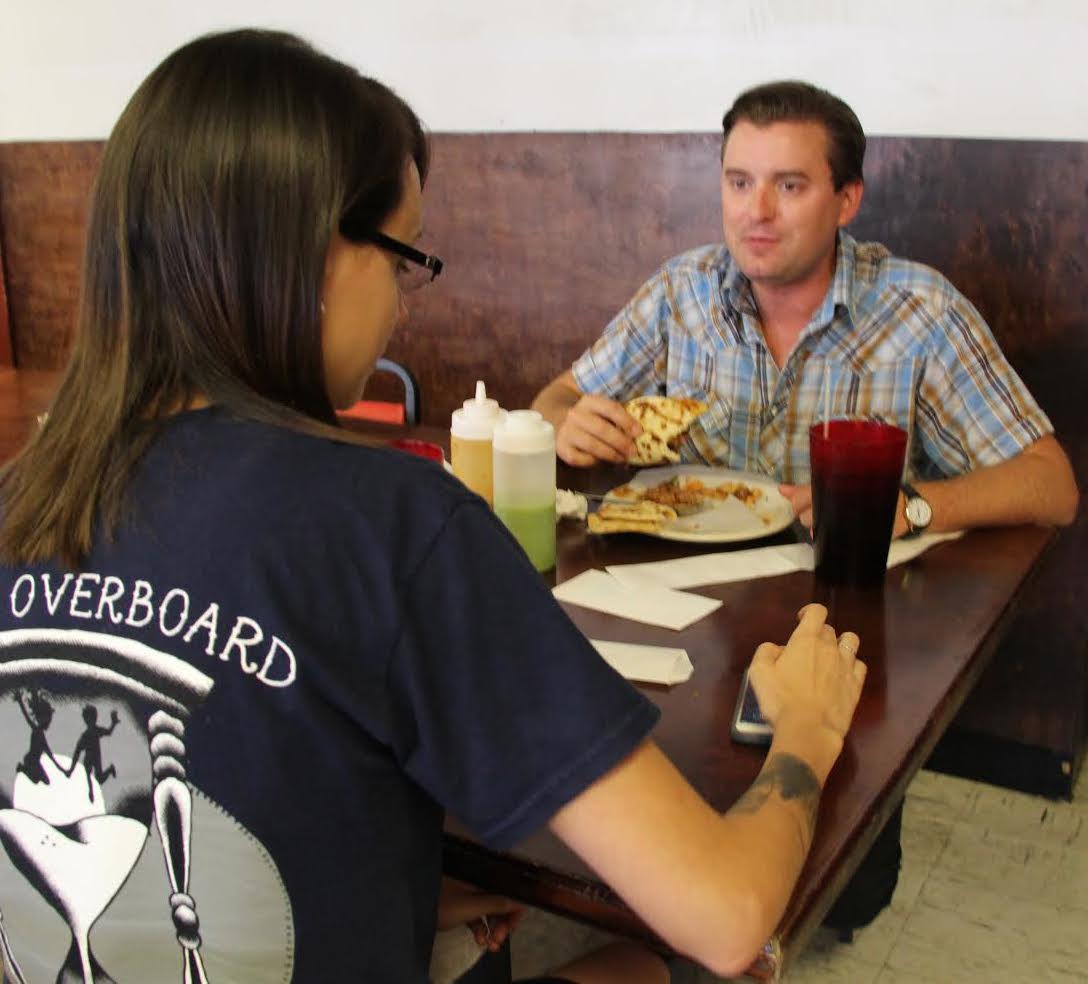 Tera: You’ve played a lot of Texas locations and you’re trying to get more shows out of state. What is your dream location to play?
Steven: I’d be happy with just dominating Texas…

Waiter brings out the food and starts putting the plates on the table.

Steven: Oh are we still recording?
Tera: Yes, we can take a break for tacos though.
Steven: Tacoooos! With Tera!

Steven: You did this with Jake Ward too right? He’s my boy.
Tera: Yeah actually I interviewed him at this restaurant. I knew him back when he was in Month of May and now he has Jake Ward and the Coast Riders. He’s been getting radio play and it’s great.
Steven: Mmm that’s good queso. Yeah Jake, Rich O’Rule and a couple other artists like that really kind of inspired me to go this more acoustic country, Southern rock kind of vibe. I think in Texas that’s really where the most support is. If I can straddle the line between rock and country it’d be great.
Tera: Are you sending out your music to different stations? Because I know that’s how Jake got his song on the radio.
Steven: He gave me a lot of advice about that. It’s funny because I’ve been getting more plays outside of Texas. I get support in Texas don’t get me wrong but last night they played me in Cincinnati, Ohio. It’s crazy. There’s this radio station in Paris that’s been spinning me. People are thanking me on Twitter and I’m just like, “No thank you. You guys are awesome.” In the spring, I’m gonna try to tour in Paris and London because there’s a station there that’s gonna start playing my stuff too.
Tera: That’s awesome! So, is that your dream location?
Steven: Heh, yeah. Paris and London! That would be my dream location.

I’ve lived in Austin, Houston, played Dallas and I think Corpus has one of the best scenes right now. Clarissa, me, Jake Ward, we all stick together. Like Cupid’s Victim is metal, I’m kind of Southern rock but we all support each other. The venues are so supportive too.

Tera: What’s your motto or advice you like to live by?
Steven: It’s kind of cliché but I’m all about the hustle. People think things are gonna happen over night and really it’s each relationship, each person you meet, follow up with them. Be nice. Be professional. Hard work and a good attitude will get you far.

Tera: What do you like to do in your free time when you’re not playing, writing or producing? You play checkers?
Steven: Uhm I play with my cats. I’m very passionate about cats. I love grillin’ and chillin’. I play golf, not very good but it’s fun to ride around, drink some beers and hit some balls. I’m a vinyl nut. I go to Half Price Books, Disc Go Round and cruise through the vinyl.

Tera: The last question I like to ask everyone is, how’re the tacos?
Steven: Really good actually. I think I like the chicken fajita one the most.