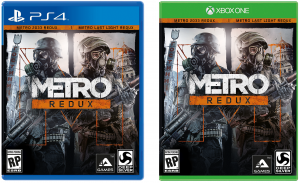 “Metro Redux” is the latest Playstation 4 and Xbox One game combining “Metro 2033” and the sequel “Metro: Last Light” on one disc for the next generation of gaming. It’s a first-person shooter that mixes some survival horror elements in the gameplay. The series was originally developed by THQ Studios but after the company shut down Deep Silver picked up the rights to “Metro” for the sequel and its next-gen re-release. “Metro 2033” was originally only released on PC and Xbox 360 but now gamers who played “Metro: Last Light” on the Playstation 3 can now play the game on the next-gen consoles. The game is a fun, intense ride that survival horror and first-person shooter fans should experience.

In both games you take control of the silent protagonist Artyom, who was a survivor of a nuclear bombing in Moscow that took place in 2013. Years after the bombing and with Russia now a radioactive wasteland, the survivors live within the Metro systems away from the radiation. But on the surface, animals have turned into mutated, blood-thirsty creatures. Events happen that cause Artyom to seek these creatures known as the “Dark Ones” who have a major part in the Metro system and he must find out what their intentions are and depending on your actions in both games can make a difference on the game’s conclusion.

These games will have you scavenging for ammo and filters for your radiation mask so it’s best to conserve your resources to survive the mutants and the worst of humanity. It also has a creepy atmosphere, making the player look around every corner of what lies ahead. While on this quest you get to collect military-grade bullets that you can use for more firepower or save them for when you go into market areas of the Metro for ammo, weapons, attachments, etc.

The game does have its fair share of glitches from time to time as sometimes people go through you during a moment where you’re just walking and enemies get stuck in a wall.