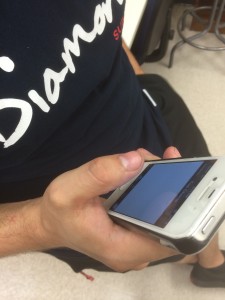 Del Mar College is creating a new app aimed at making life easier for students. If you have seen or downloaded the EllucianGo app the college released last spring, prepare to expect something bigger from this new addition.

Although the EllucianGo app is relatively new to Del Mar students, the amenities provided through EllucianGo are limited and don’t allow for the growth that August Alfonso, chief information technology officer at Del Mar, and his team intend to pursue.

The new app is being created using the Media Labs server, which was designed by students at MIT. Del Mar College’s Web Services Department of three is partnered with College Relations to complete the design and format of the new app.

According to Alfonso, the first phase of the app, VikingGo, will be available in late October.

Phase One will feature campus updates, the college’s events calendar, video channel, social media channels, photos, campus maps, course catalog, people directory and emergency notifications. It also will include “Ask the Viking,” which answers questions proposed by Del Mar students and staff.
In Phase Two, VikingGo is planned to receive a massive upgrade to incorporate new features such as real-time registration through the app, adding and dropping classes and the ability to view grades — right in time for finals.

“It’s pretty dang convenient,” said Jessica Montalvo-Cummings, the interim associate director of Web Services. Cummings graduated from Del Mar in 2003 and is one of the brains behind the creation and development of the app.

Phase Three will, potentially, incorporate Canvas into the VikingGo app, making it easier and simpler for students to complete their school-related activities and work all in one app.

“Everything about applications and mobility is about user interface. The interface should be very sensible and simple to the user,” Alfonso said. Del Mar student Julissa Mora, a fourth-year court reporting major, said she plans to download the new app when it becomes available. “I’ve never heard of EllucianGo, but I will download VikingGo, now that I know about it,” Mora said.

As the Web Services Department creates and discovers new ideas to make life at Del Mar easier, they are fixing the last of the bugs and preparing the app for its debut on your phone. The app will be available for both Apple and Android and those who currently have the EllucianGo app will receive a notification when it’s time to make the switch to VikingGo.