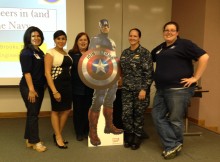 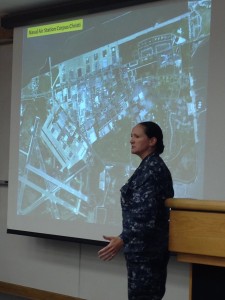 It has always been difficult being a woman in a male-dominated society, but times are definitely changing as women are becoming the new faces of engineering, and engineering industries in both private and military sectors are looking for women in particular.

Del Mar College hosted the event Women in Engineering on Nov. 5 in the Venters Building. Everyone was welcome to the event to listen to the guest speakers — Naval Commander Amanda Brooks, a mechanical engineer for the Navy, and Amanda Marie Estrada, a former National Science Foundation scholar and civil/architectural engineer for Kiewit Industries.

Engineering professor Laura B. Parr, Ph.D., helped coordinate the event and discussed why it was directed toward women.

“We need more women in the field,” said Parr, who added that with women’s ability to multitask and keen attention to detail, they are more desirable than their male counterparts to many employers. “The personality traits (of women) are sociable and being able to address cultural differences is what is needed in a global society, and industries can’t neglect those issues.”

Engineers are known for making the impossible happen, something Brooks is familiar with. In Afghanistan, she worked with NATO to spend $6 billion to help develop the Afghan army by building bases, airfields and training sites.

“They had nothing. It was very difficult because we were building these state-of-the-art facilities for guys who didn’t know how to flush the toilet,” Brooks said. “We had to actually train them to not to use rocks because when you live in a desert with no trees and no (toilet) paper all you have is rocks.

“There are barriers when it comes to building in (different parts of the world) because of the cultural differences,” Brooks said. “You just have to learn to build things right for those you’re building for.”

One thing Brooks has learned from her travels is that “infrastructure is the key to civilization.”

Working for the Navy in a field usually occupied by men is a challenge in itself. According to Brooks, 10 percent of civil core officers are women compared with the national average of women in engineering fields, which is at 13 percent.

“The Navy sees this as a real problem in diversity and is working hard to make things better for women. Since the Tailhook scandal, the Navy began to have a different mentality with women. Fortunately for myself, I was able to benefit really well from this and in my field I have not witnessed any gender inequality,” Brooks said, referring to a series of sexual assaults involving Navy and Marine officers at a 1991 symposium in Las Vegas.

Estrada, a civil/architectural engineer for Kiewit Industries, told of some of her challenges in the industry.

“Ladies, do not ever let anyone treat you differently, nor should you be intimidated,” Estrada said. “People will try to intimidate you. You are just as smart as the guys, just as equal as the guys, and you should be just as tough as the guys. You need to be able to stand your ground and by standing your ground that is how you earn respect in an industry.”

Estrada said by standing her ground and believing in herself she gained the respect of her co-workers, who recognized her as a hard worker.

Several factors have led to a shortage of female engineers. For many women, it is a considerable choice. Many women want to start families and have children while supporting their husband in his career. However, there is also this archaic notion still built inside the minds of many that math and science are for the boys. Another reason is that young girls are not encouraged enough at an early enough age to pursue the sciences.

Being a woman is empowering and to learn that women are now the future of engineering has the power to motivate many. If women can start believing how much of an impact they have in the sciences the world will start seeing more women in the field of engineering. When that day comes, women will have definitely conquered the stereotype.