Get ready to “lawyer up” with Bob Odenkirk as he returns as the wise-cracking lawyer Saul Goodman in AMC’s highly anticipated spin-off to “Breaking Bad,” titled “Better Call Saul.” Another familiar face on the show is Jonathan Banks, who returns as Mike Ehrmantraut, while Patrick Fabian, Rhea Seehorn, Michael Mando and Michael McKean are new to the cast. Vince Gilligan, of course, made this show come to life, but he also gets help from Peter Gould this time around.

A lot of hype has surrounded the show. While many viewers were excited to see Goodman’s story, others feared “Saul” was just cashing in on the success “Breaking Bad” to make a quick buck. Thankfully this show does not feel like that at all, and Gilligan’s magic strikes again.

Before he was Saul Goodman, he was James McGill (Odenkirk), a lawyer who struggles to get taken seriously as a lawyer. He only makes about $700 per defense and isn’t too happy about it. To make matters worse, his brother Chuck’s (McKean) law firm, Hamlin, Hamlin & McGill, run by Howard Hamlin (Fabian), makes James his brother’s messenger and he tries to get Chuck out of there. Viewers get to see Saul before he actually became “Saul Goodman” and will continue to build on that as the show progresses. 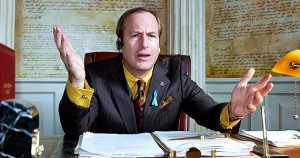 Odenkirk is effortlessly watchable as Saul “James McGill” Goodman and it is great to see him back in the role. Also, it is great the show is showing viewers that he wasn’t always the best lawyer as he struggles to succeed and gives more depth to his character. There are many nods to “Breaking Bad” on the show which won’t be spoiled but you just have to see for yourself to get them. If you never watched the show this spin-off is based on then it could confuse some viewers as to what’s going on, especially the opening scene of the first episode. But Gilligan’s style and choice for directors for each episode all capture the feel and intensity that “Breaking Bad” had while still managing to be its own show. This definitely is one of those spin-off shows that is actually good — in fact, it is one of the best.

“Better Call Saul” lives up to the hype with great acting, writing and directing that definitely make this show worth watching live. It’s on at 9 p.m. Mondays on AMC, and if you missed previous episodes you can go to AMC.com to watch them with no cable subscription login required. And also check out “Breaking Bad,” which is on Netflix and available on Blu-ray and DVD season set to help those who are confused with the references get a better understanding of what is going on.