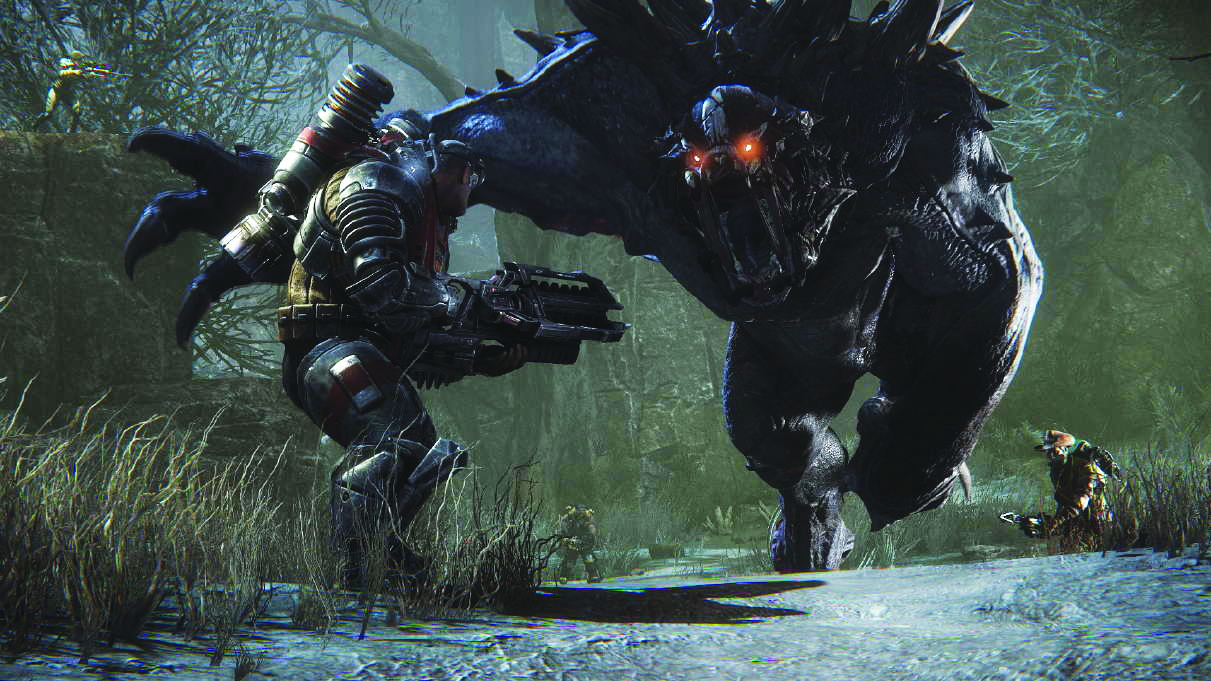 “Evolve” is a first-person shooter, multiplayer-driven game developed by Turtle Rock Studios, the makers of “Left 4 Dead,” and published by 2K Games for Playstation 4, Xbox One and PC. The game was originally supposed to be published by THQ Studios in 2011 but after THQ filed for bankruptcy in 2012, 2K Games bought the publishing rights to the game. When it was revealed in 2014, gamers were blown away by the look of the game and the promising gameplay that comes along with it. It was well received from the Alphas and showed promise. Unfortunately, this game doesn’t live up to the hype.

The game doesn’t really have a set story but you’re on a planet called Shear. This planet is on a far arm of space where humanity lives but is soon attacked by monsters. This brings the attention of William Cabot, a former planet tamer brought out of retirement. Cabot recruits a band of mercenaries to try to take out these threats. This basically is set up to build the multiplayer experience but there is no dedicated single-player campaign with a story mode.

It’s a 4 vs. 1 match that lets gamers choose to play as one of the mercenaries or unleash the powers of a monster. The positive thing is that this game did work on release with few to no glitches and shows that Turtle Rock Studios worked hard to make sure this game functioned well upon release. Playing as a monster was definitely a lot of fun. Players can wreak havoc upon friends and also get to feed on creatures, which helps your monster evolve into three stages, with the third being the most powerful. 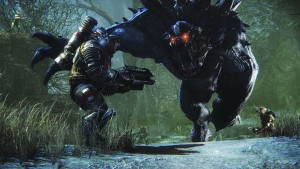 The game also has a great score that gets players in the mood for a match. It is definitely a job well done from Jason Graves, the game’s score composer, and many gamers will want to pick up the soundtrack to the game.

The game has a five-day story called “Evacuation” mode that could pass as a campaign. It consists of a variety of game modes such as Nest, Hunt and Rescue and ends with a winner-take-all Defend mode on the fifth day. But what makes it unique is if a human or monster wins it gives the player an advantage on the next map and also with a cutscene that shows the effects of the winning side taking place.

Unfortunately the game, even with all these modes, feels shallow and empty in ways. If you play this game be sure all of your friends are playing or find an online match because it’s used to mask inconsistent AI in some aspects. If you play as the humans with an AI monster you’re doomed as some of them feel too smart, almost ensuring a win for them. There is also a lizard-like creature that can heal and track the monster’s prints; however, the lizard can also make you go around in circles away from the monster. It has lack of content and feels like a “free to play” game yet most of those games offer more content than this game. This game is one of the most wasted opportunities of 2015. It has the potential to be legendary but suffers from too many flaws.

With so much of the story lacking, developers may make downloadable content available. As with games such as “Destiny” and “Titanfall,” developers often feel the need to give us the rest of the story as DLC, making gamers pay extra to play the full game. This is a practice that may get out of hand and needs to be stopped before gaming is looked down upon.

With a wasted concept and lack of content, “Evolve” isn’t worth its asking price and is worth a rental at best. Borrow it from a friend or wait for it to come down in price because it’s not a game many people will be playing in the end.