Community College Day gave Del Mar College students the opportunity to voice their stories to state government officials. Some 35 students, along with a handful of Regents and administration members, set out for Austin at 4:30 a.m. on a cold, misty Feb. 3 to represent the school in delivering multiple proposals.

After being recognized from the Senate floor by Sen. Juan “Chuy” Hinojosa, D-McAllen, students then had the honor of a meet-and-greet with state Reps. Abel Herrero, D-Robstown, and Todd Hunter, R-Corpus Christi. 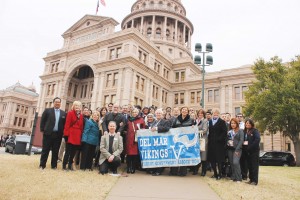 “I was hoping that he would give me a message that would encourage the other women in the room with us and that I could take back and express to other women,” Mugabe said, “He answered in a reasonable response; he said, ‘In the next coming years, women are going to be a force to reckon with.’ ”

Mugabe said that hearing the perspective of a state representative on women leadership was insightful and encouraging.

During the visit to the State Capitol, many issues were mentioned and Del Mar’s College Relations Office is continuing to follow those that can affect students and the community. Among these issues are tuition and fees, transferability of course credits, handguns on campus, student financial aid funding, employee health insurance and textbook costs.

This article contains material from the Corpus Christi Caller-Times.