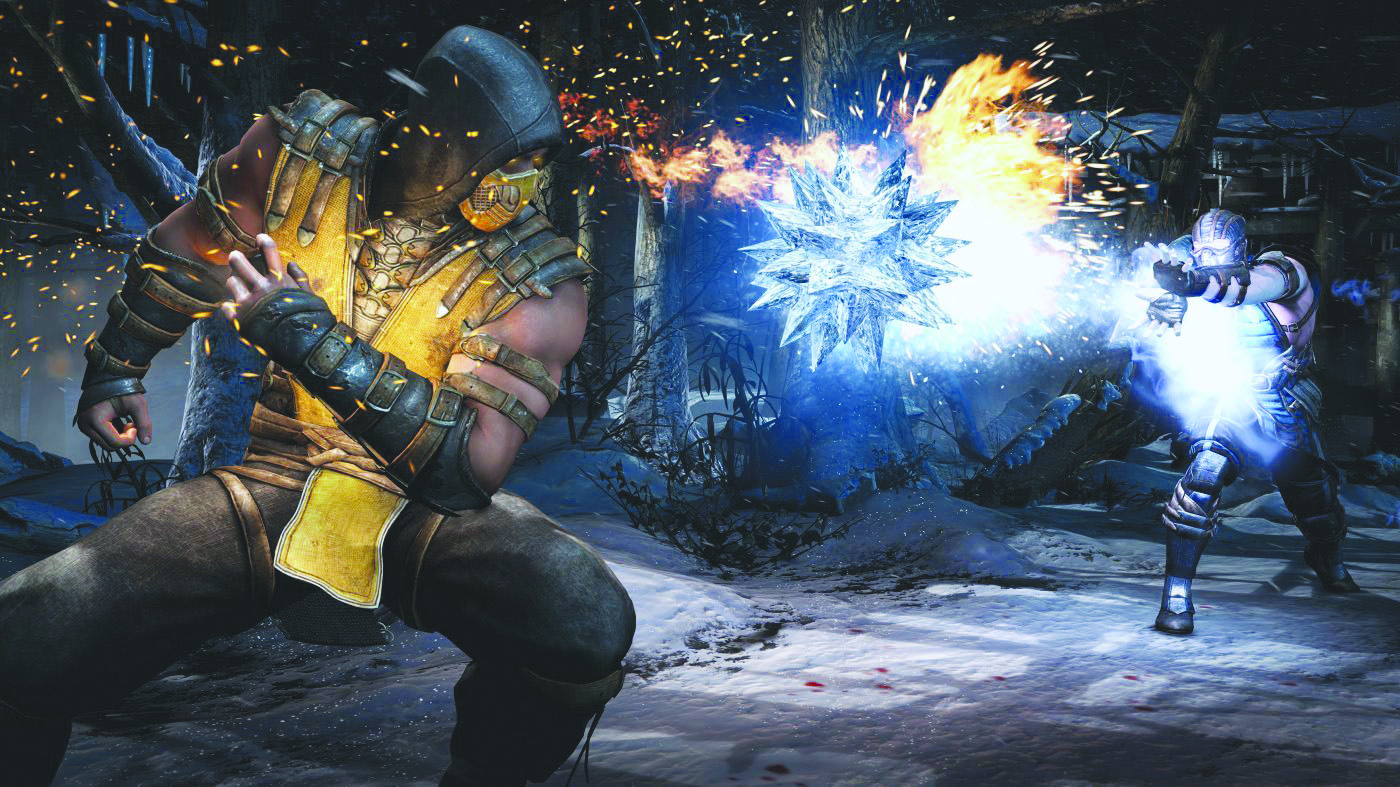 Scorpion (left) and Sub-Zero go head to head in "Mortal Kombat X," the latest installment in the popular fighting franchise. It also became one of the fastest selling games in the series upon its release and is guaranteed to be a huge hit.

Developer NeatherRealm Studios hopes to repeat the same magic it had with “Mortal Kombat (2011)” otherwise known as “Mortal Kombat 9,” with its latest release in the series, “Mortal Kombat X.” Lots of hype was surrounding the game considering the last one was a hit and breathed life into the series after the disappointing “Mortal Kombat vs. DC Universe.” So the main question is, does this game live up to the hype? It does, and then some.

The game’s story mode picks up where “MK 9” left off, with Shao Kahn defeated and Shinnok attacking Earthrealm with his army of Neatherrealm forces. Those who fallen after the battle with Kahn have been resurrected as revenants under Quan Chi’s control. Shinnok hopes to get to the Jinsei Chamber, the source of Earthrealm’s life force, and take it over. The story goes from the past to 25 years later and allows gamers to play as their favorites such as Sonya Blade, Johnny Cage, Scorpion and Sub Zero while trying to stop Shinnok’s rule. The game also introduces players to the offsprings of our heroes such as Johnny and Sonya’s daughter, Cassie Cage; Jax Briggs’ daughter, Jacqueline; and Kenshi’s son, Takeda, to help fight Shinnok.

Despite the game’s story mode being a bit shorter than “MK 9’s” it is still fun to play and almost feels like a “Mortal Kombat” movie. With the addition of the offspring characters, several new characters come into play such as an Outerrealm god named Kotal Khan and his servants, an outlaw named Erron Black, a brute with a companion Ferra/Torr, and an insect-like person named D’Vorah. These new characters help the series evolve while staying true to its roots. The fighting in the game is fluid and flows perfectly, making it fast paced and brutal. Players also interact with certain items in the arena such as jumping behind a person evading an attack, or using certain items as weapons such as hot coals, shields, walls and even an old lady. But the one thing the series is known for is its fatalities, which are even more gruesome and fun to pull off. The updated graphics also look a bit more realistic than in previous installments.

Stage fatalities that have been in all installments have been taken out, which is disappointing, but are replaced by two fatalities, six brutalities and faction kills. The series also introduces a new type of fatalities for rage quitters called “Quitality,” which automatically kills the opponent who decides to just abruptly quit. Faction kills have also been added and vary depending on which factions players choose. Another new feature is “Faction Wars” and when you first start the game you have to choose a faction to serve such as Lin Kuei, Special Forces, White Lotus Society, Black Dragon or the Brotherhood of Shadow. Each week each faction must complete certain challenges and have Outworld invasions you can compete in.

Towers make a comeback too with your basic towers, test your luck, test your might and challenge towers. But developers added a new feature called “Living Towers” that has one tower that changes every hour, one that changes every day, and a premier tower that has a special event that happens including a “Jason Voorhees” tower. Even if you didn’t purchase the Kombat Pack season pass for the game you will still be able to play as him just to get a feel of how he plays like.

Online flows well enough with little lag here and there though King of the Hill has been downgraded, getting rid of those fun characters who throw things at the screen during a match. The Krypt has recevied a major upgrade this time around, making it a first-person view walking through the Krypt that you can unlock fatalities and brutalities. It also adds an adventure as you have to search for certain things to unlock different areas of the Krypt and also some surprises come your way as you explore.

In the end, “Mortal Kombat X” has everything you want in a game with great gameplay and fighting. It is brutal in every way, making this a game a must-buy.

“Mortal Kombat X” is out on Playstation 4, Xbox One and PC. Playstation 3 and Xbox 360 owners have to wait until June 3 to get their hands on a copy.