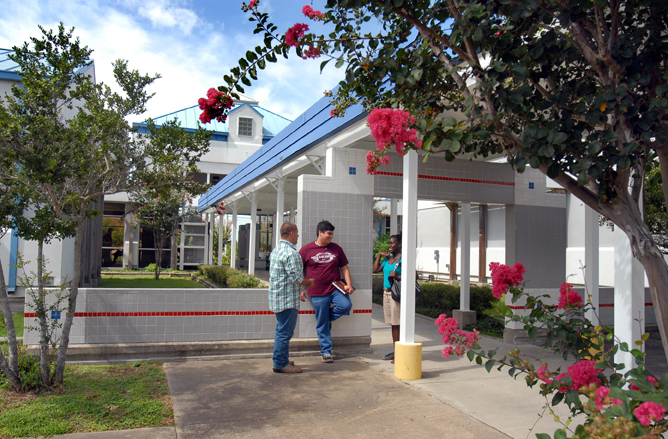 Del Mar College’s Northwest Center may be suffering from growing pains, Regents heard at the Sept. 8 board meeting.

The Northwest Center has seen a nearly 300 percent increase in enrollment from 2010 to 2015, Leonard Rivera, director of off-campus programs, told Regents at the meeting. The center now offers GED, continuing education and dual credit classes.

“The Northwest Center is a dynamic center,” Rivera said. “The center has seven classrooms and five offices, but enrollment has increased so much that we are looking for more space.”

The college, which has been renting space from a neighboring hospital, hopes for a permanent solution in the near future.

Sloan had already signed one contract for some of the work, while another contract was under negotiation. Regents had wanted the contracts to be negotiated at the same time.

Sloan said he could not discuss pending negotiations because of confidentiality purposes, but any holes will be filled once negotiations have been completed.

The next board meeting will be at 1 p.m. Oct. 6 in the Isensee Board Room in the Harvin Center on Del Mar College’s East Campus.

n Former Texas A&M University-Corpus Christi President Robert Furgason shared details of the 60×30 higher education plan for Texas. Furgason said the main purpose of the plan is to focus on completion rate rather than enrollment rate.

“This gives us an opportunity to overlap our strategic plan with the 60×30 plan,” said Mark Escamilla, Del Mar College president. “We will be applying it to our current plan, and you will be hearing about it constantly in the near future.”

n Several groups were recognized. Among them was Collegiate High School for winning the bronze medal award for best high school in the nation. More than 6,500 public high schools received a gold, silver or bronze medal in the U.S News rankings.

“We focus on being progressive and keeping the school current,” said Tracie Rodriguez, Collegiate High School principal. “We want to be bigger, better, stronger.”