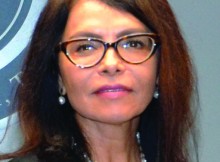 With illegal immigration becoming more and more of an issue in this country, a question begs to be answered: What happens to those who are already here? Are they to be treated like criminals and kept in facilities against their wills? Olivia Lopez says no. Lopez, an adjunct social work professor at Del Mar College, was able to see firsthand what really goes on in these so-called “residential centers.”

Lopez received an offer to provide social services and care to residents of the Karnes County Residential Center in Karnes City, about an hour south of San Antonio. She jumped at the opportunity to help.

“My dad was an immigrant. I just have a sense of commitment to that group,” she said.

Lopez describes herself as a natural helper and a natural advocate, which is really what got her into social work in the first place.

The offer was an exciting one, and Lopez was eager to be able to be work with a group of people dear to her heart. The center is a facility that houses undocumented women and children from Latin and South America.

“Family detention is just women and children. If your family came over together, immigration would separate you. The father would go to a male prison and the mother and children would be sent to a family detention center,” Lopez said. But there were some serious violations of human rights taking place in a facility that was supposed to take care of its residents.

When she arrived at the Karnes County Residential Center, Lopez said she had a bad feeling from the beginning in regard to the medical care of the children and some other concerns.

After about three months, Lopez chose to step down from her position at the facility.

“There was just lots of injustices happening there … really human rights violations. I certainly wasn’t going to compromise my licensure at all.” But she didn’t stop there.

“With that case, the legs were moving and it had a lot of traction. That was the time to do it,” she said.

Lopez is working with others who agree that the treatment of the people in these facilities is unfair, unethical, and quite frankly, violating their rights as human beings.

“I ended up in Washington, D.C., and am now working with attorneys and other groups to close these facilities and come up with other ways to manage this group of people that are coming here,” she said. “It was really important to me to get out ahead of it and do it in a way that was as professional I as I could possibly be.”

Lopez was invited by the Democratic Progressive Caucus to speak at a forum in Washington, D.C. She was on a panel with several other women, some of whom had been in detention, and they were able to offer information about what was really going on at the detention centers.

“There’s a lot of work happening, but it’s a process. I want social workers to be a part of that. We are really the profession to do it, not prison systems,” she said.

She wants social workers to be able to take care of these people and give them the care that they deserve as humans.