“I was beaten so badly by the San Francisco Police Department that I was nearly dead,” human rights activist Dolores Huerta said. “I was boycotting grapes and protesting George Bush. I broke four ribs, and my spleen had burst.”

Huerta shared that story with a full audience Oct. 23 in the Richardson Performance Hall on Del Mar College’s East Campus to kick off the two-day Coastal Bend Social Forum. Several in attendance traveled hours to see Huerta speak about her life and her views on human rights.

Huerta has been working as a human rights activist and as a community organizer for the majority of her life. Now 85, Huerta is the president of the Dolores Huerta Foundation and continues her life’s work.

“I had gotten my degree for teaching from a community college, and soon saw through the children that the community needed help,” Huerta said. “I tried to get the children food and clothes, but the school system didn’t help. I quit my job as a teacher and starting organizing.” 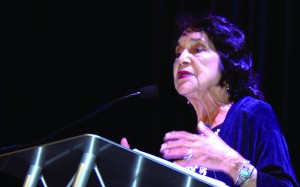 Huerta has received numerous awards including the Medal of Freedom Award in 2012 and the Eleanor D. Roosevelt Human Rights Award in 1998, and was named one of the icons from the American Civil Rights Movement in 2011.

“The situation of the farmworkers was dire,” Huerta said. “I was going house to house registering people to vote, and I saw that the farmworkers’ homes had dirt floors and cardboard as furniture.”

Huerta, mother of 11, worked alongside Cesar Chavez to form the United Farm Workers to advocate for farmworkers.

“Most of the work we do is at the grassroots level to enact legislation,” Huerta said. “We want to elect representatives that will stand up for labor unions.”

According to Huerta, the most important thing to do is bring awareness. People have to constantly be reminded that their food in a grocery store came from a field where an undocumented person has picked it, she said.

“Someone needs to remind Donald Trump that an undocumented immigrant picked the food he is eating,” Huerta said. “Education is so crucial to the country. It is our way to avoid ignorance, Donald Trump is ignorant.”

Huerta also prides herself in being a feminist. Huerta’s father would physically abuse her mother, which developed her feministic way of thinking.

“We have to teach our young women differently then what we have been doing,” Huerta said. “Society has taught them to be victims and to wait for a man to fix their life. We need to change this. Unless women take power we will never have peace in the world.”

The Dolores Huerta Foundation was made to create networks of healthy, organized communities pursuing social justice through systemic and structural transformation.

“The sad thing about Texas is that it is so far behind,” Huerta said. “The only way to make changes in the community is by getting out to vote.”

“The Latino has so much power based on numbers alone,” Huerta said. “All we have to do is vote.”