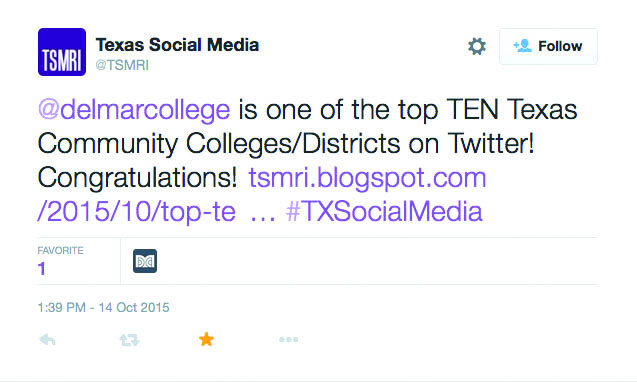 Del Mar College was honored as one of the top higher education institutions on Twitter by the Texas Social Media Research Institute blog on Oct. 14.

The blog highlighted Del Mar for its use on the social media platform based on a Klout score of at least 45 and number of followers. According to Klout.com, the Klout score is a number between one and 100 that represents an organization’s influence. The higher the score, the more influential an organization is. Del Mar College has a Klout score of 49 and the college’s Twitter account, @delmarcollege, has more than 3,660 followers.

Del Mar College was recognized by the Texas Social Media Research Institute as one of the top 10 Texas Community Colleges/Districts on Twitter.

“It is very exciting and a huge honor to receive this recognition,” said Elaine Krift, Del Mar College’s director of social media. “In terms of social media, social media is such a key way to communicate with the Del Mar community, but especially students. That is what we are trying to strive for is to reach out to students, and in winning this recognition it goes to show that we are doing something right.”

Officials at the Texas Social Media Research Institute, which is housed at Tarleton State University in Stephenville, said in a news release Oct. 7, the “Texas Higher Education Data – List of Higher Education Institutions” webpage will help determine the top higher education institutions on the lists.

Institutions that made the list will be honored during the fifth annual Texas Social Media Conference on Nov. 6 in Fort Worth. Students can feel free to spread the news on their social media platforms by using #TXSocialMedia.