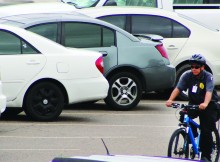 Security, once again, was the topic of discussion during the November Board of Regents meeting. Del Mar College President Mark Escamilla emphasized the need for an on-campus police force.

“The crime numbers are very, very good,” White said. “The report includes everything that happens on campus to the sidewalk across the street. So, if a police officer pulls over a vehicle and they pull onto Del Mar College property then we have to report it in our report.”

Escamilla hopes to create a new full-time on-campus police force to avoid any type of crime that may occur on any DMC property.

“The Clery Act Statistics don’t include all the incidents on campus, so there are other factors to consider that aren’t on the report,” Escamilla said.

Escamilla held a faculty meeting in the Richardson Performance Hall on Nov. 13 to vocalize his concerns.

The main concern for many faculty members was concealed handguns on campus set to take place in the fall of 2017.

Most of the anonymous questions asked were regarding guns on campus and how it will affect their teaching and their students.

In response to these questions, Escamilla and a panel of crisis communication and security experts said they are unsure of how guns will affect the campus, but will have to wait and see.

Hoping to meet with students in the near future, Escamilla is working with Beverly Cage, director of Student Leadership and Campus Life, to set up a date. Students will be invited to express their concerns on safety to the president.

During the public comments at the end of the Board of Regent meeting, two men voiced their opinion on a previous statement made by Regent Guy Watts suggesting the separation of students based on preparedness. Some fear that this preparedness will lead to separation based on race.

“Del Mar College is a community college. It should be for all types of students,” Tony Jimenez said. “I don’t see all the same race on the board, I see a mix. We need to pass a policy saying anyone on the board cannot be a racist.”

After the meeting, Jimenez was reassured that there are no plans now or in the future to separate students based on preparedness or race.

In attendance at the meeting was state Sen Juan “Chuy” Hinojosa, who contributed a $15,000 endowment to the Del Mar College Foundation.

“Education is the greatest equalizer,” Hinojosa said. “We need to help our students with the rising price of college. Our students are the key to the future of our community and our country.”

Cage was awarded the Outstanding Achievement award on behalf of the National Society of Leadership and Success.