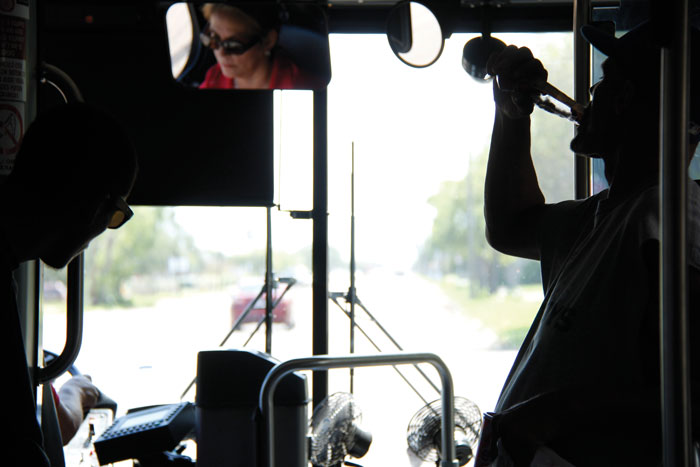 Growing up in a household that possessed more than one vehicle in the driveway was ordinary for me, but for many others the public transportation system is all they have to get around the city of Corpus Christi.

Before this experiment, I had never rode on a public bus before, not because I did not want to, but because I did not need to. I had the luxury of being able to drive wherever I wanted, whenever I wanted, take trips to neighboring cities for days at a time, but many people are restricted with where they can go, even with the help of public transportation.

On a Wednesday afternoon I had decided to take a full route on the bus beginning at the Six Points bus station at what should’ve been 12:35 p.m., but ended up being four minutes over. The route included stops at Ayers and Saratoga, Greenwood, Moody High School, back to Ayers and Saratoga, Port Ayers station, and finally back to Six Points. According to the bus schedule, the entire route should have taken a little over an hour and 20 minutes, but it seemed to go on forever, which could be tied to the fact I was anticipating to get off of the bus before I had even gotten on.

The bus pulled up to the station around 12:40 p.m., I got on and showed my Del Mar College identification card, and my ride was free. People pay up to 70 cents per ride, but weekly and monthly passes are also available.

I took a seat at the very back of the bus like any other person would do and waited until I felt comfortable enough to sit next to a complete stranger and spark up a conversation.

As I sit there waiting until the next stop for an opportunity for more people to get on board, I thought to myself how I would feel having to do this every day in order to get to work or school.

Since buses seem to run late daily, many people are often forced to catch the bus about an hour or two early to ensure prompt arrival of their destination. The bus was clean, quiet, offered free Wi-Fi and seemed safe. There was a preset thought in my head that people who ride the bus are weird or troublesome thanks to television and movies, but they are ordinary people just trying to stay out of walking in the blistering heat.

Some people find that the bus system has greatly improved over the years despite the fact that the bus doesn’t always run on schedule.

Alex Belle, a 24-year-old mother of two, was riding the bus to work, where she would depart at the Ayers and Saratoga stop and still have to walk a further 25 minute distance, which she still considers very convenient for herself.

“I’ve been riding the bus since I was a teenager and they seem to be getting better as time goes on,” Belle said when asked what could be done to improve the public transportation system. People are now able to track where their bus is and how long it will take to arrive, but that still does not stop some of the delays that happen often. There were people of all ages riding along, minding their own business, waiting to get off and continue their day.

Another woman named Samantha Amador was new to the public transportation system. Her car was totaled a few months prior and this was her only form of transportation to school.

“I’ll admit that I was terrified at first, but it is really not so bad once you feel comfortable with the routes you are riding on,” she said. Like others, she too had to be cautious of her timing getting on and off the bus.

My ride on the bus was not what I had expected, in a comforting way, which means I now have more transportation options than I had before. The people were friendly and the ride was smooth. It’s an easy way of getting around town if you do not have access to your own vehicle, it may not always be on schedule, but it is a lot better than having nothing.