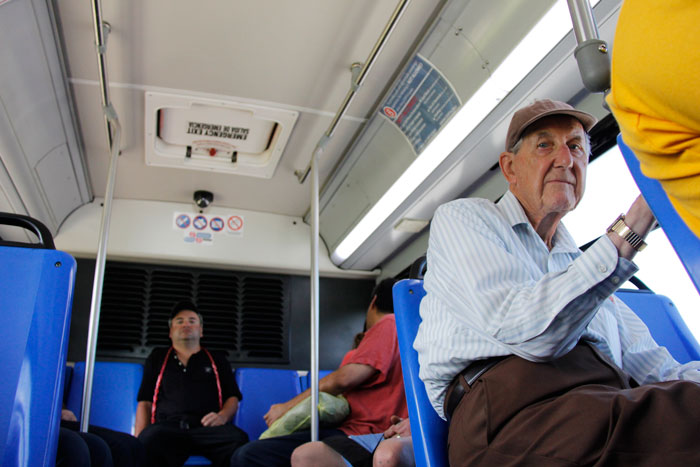 Chasten was bouncing up and down with excitement as the bus rolled into a stop. “It’s his birthday,” his mother explained. Chasten’s mother, Julie, looked at me in tears with her bright green eyes.

Julie said she didn’t have a car because her boyfriend has not been home in three days and she had not heard from him. Julie was on her way to WalMart for her son’s birthday present. He wanted the new “Jurassic Park” action figure Tyrannosaurs Rex.

Julie said they have no means of transportation because she has no family here and the only thing that keeps her strong is her son.

The bus ride assignment was also my first time on a bus and an interesting experience. After more than an hour, I noticed a young male was following me and watched my every move so toward the end of my assignment, I took the necessary precautions and called for a ride.

Many people ride the bus to get to their jobs, school and home. It is a ride where you can meet all different kinds of people, but also be safe when riding.

Also, along the way I noticed there were more single mothers with children and elders who no longer drive because of disabilities or they just enjoy riding along to meet new friends.

When I saw Josie, a 66-year-old with dark blond hair and a blue vintage sapphire ring, I had to compliment her on how beautiful her ring was. After a few minutes in our conversation, we then realized we shared the same birthday! Her favorite part of the bus ride is meeting new people and getting adapted to a new lifestyle after her husband passed away two years ago of lung cancer. Josie also mentioned the reason she rides the bus is because she is going partially blind but enjoys riding the bus every day.

Meeting new people on the bus ride was interesting and fac- ing my fears by riding on a bus an experience and I’m glad I did!