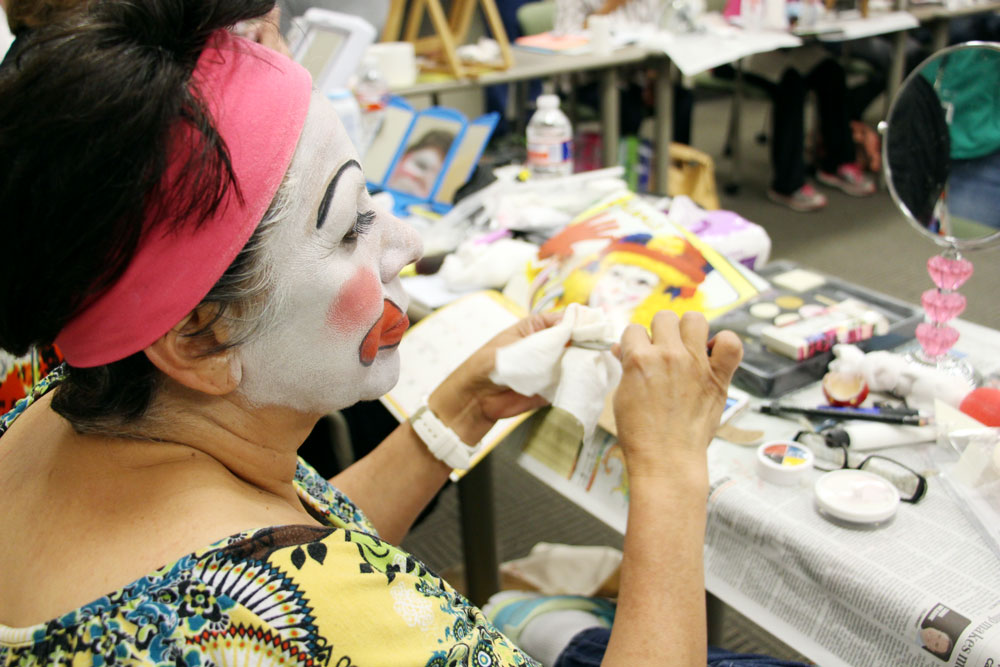 When Benjamin Woodard came to class, he didn’t have the usual textbooks and notepad with him. Instead, his assignment for the day meant bringing balloons and face paint. 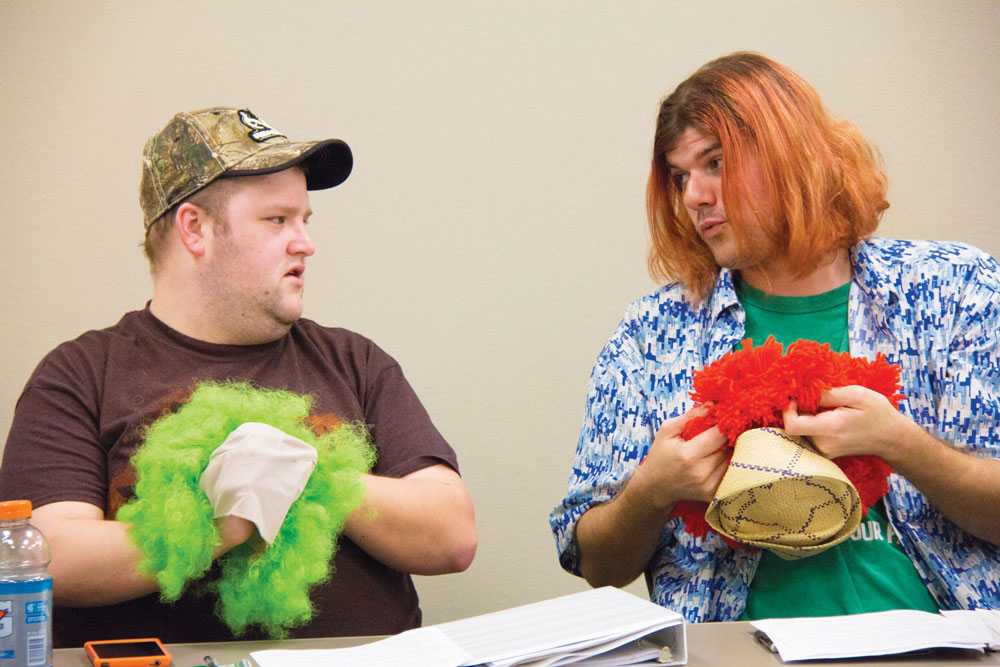 Ben Abbott (left) and Benjamin Woodard take a closer look at the clown wigs. Woodard said his favorite part of the class is watching everyone create.

Woodard, who works with an entertainment company called Magic Emporium, is one of 18 students in Del Mar College’s five-week Clown College, which meets Tuesdays at the Center for Economic Development.

“We do magic shows and also branch out and try to do a little bit of everything,” Woodard said of Magic Emporium, which works with local charities.“We do a little bit of balloon work, of course some comedy with the clown work and pretty much anything you would expect from a carnival or a circus we try to provide, but right in your own backyard.”

Woodard said his goal is to eventually do more charitable entertainment at places such as Driscoll Children’s Hospital. He and his classmates are learning from one of South Texas’ most recognizable painted faces. 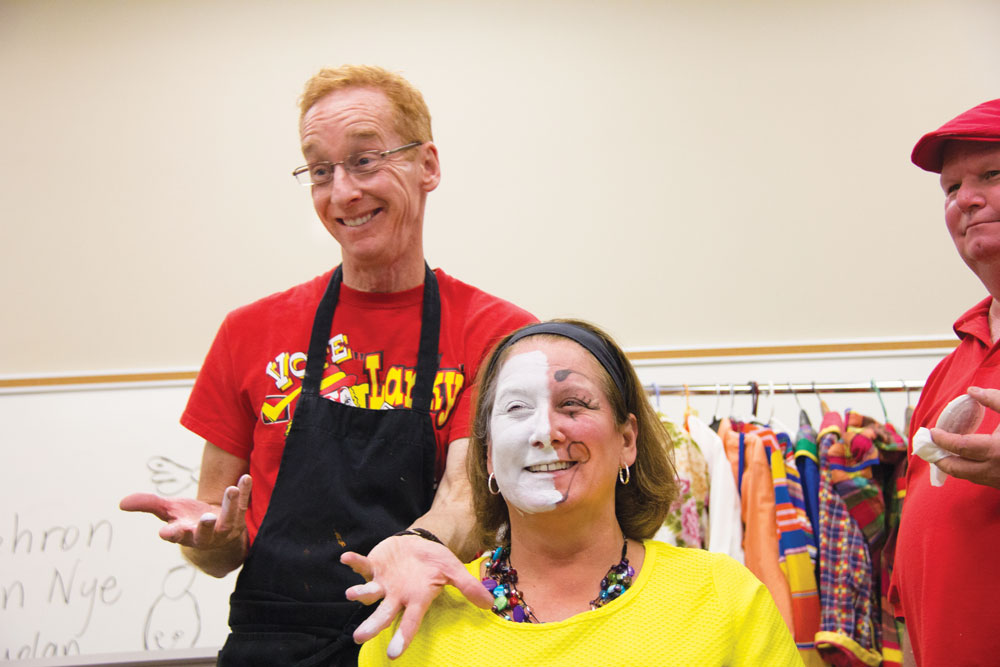 Danny Kollaja describes the importance of patting after applying makeup so fingerprints and lines are blended in. Kollaja uses Sharon Haynes as his example for a “White Face” clown.

Danny Kollaja, aka Lanky the Clown, is the instructor for the course and has entertained all over the world. He has appeared in the movie “Patch Adams,” served on the Board of Directors for Clowns of America International and been a clowning instructor for over a decade.

“The primary goal is to prepare and inspire the students to be the best they desire to be in the art of clowning, to take the skills they learn and continue to develop them for the benefit of themselves and our community,” Kollaja said.

Orlando Valdez, another student in the course, is wanting to do just that. Valdez also works with Magic Emporium, which hires entertainment such as clowns and magicians for parties and events.

“We have a criteria for our clowns to at least have a certificate of some sort that prove we are as good as we hope and say we are. For the most part we are for hire for birthday parties or we promote public shows or make surprise appearances at different venues in town,” Valdez said. “We did work with CASA by performing and providing entertainment for a public event and we hope to do more charitable events in the future.” 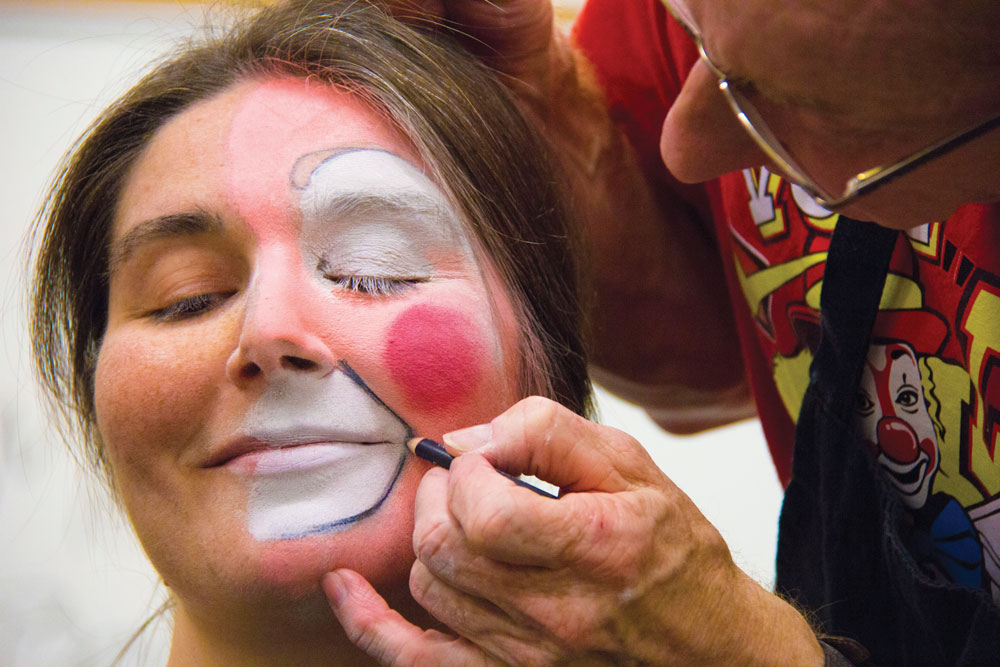 Elaine Krift, social media and video specialist for DMC, shows her smile lines so Kollaja can outline what will make her unique as an “Auguste” clown. The Auguste clown has a muzzle and more color than the “White Face.”

Valdez said he hopes to be able to offer more professional clowns in the area.

“We have studied a lot on our own or with other independent people who do this type of entertainment, but we hope to gain more professionalism to refine it, to make our show perfect and meet a standard that our audience should expect with professional clowns,” Valdez said.

The class will have each student create their own clown as well as have a written and performance final exam before earning their Clown College diplomas. The performance part of the exam will be open to the public.

Sarah Fecht is a photographer/reporter for the Del Mar College Foghorn and has been on the staff since Spring 2014. She is a double major in Journalism/Radio and Television and plans to pursue her bachelors after graduation. You can reach Sarah at sfecht@foghornnews.com or follow her on Twitter @Fecht08.

One thought on “Class of Clowns”