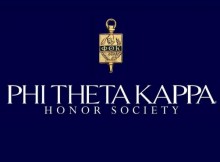 The Del Mar Gamma Sigma Chapter of Phi Theta Kappa was recently recognized with four state awards at the PTK Texas Regional Conference for their involvement in the community, as well as their efforts to improve their chapter.

The chapter received an award for its “Honors in Action” project, which focused on pollution along the coast. The “Honors in Action” project allows PTK members to develop action-oriented projects that better the community through research. Members must choose from eight HIA themes, and must conduct thorough research related to their chosen topic. The Gamma Sigma Chapter chose the theme of “Exploring the Natural Environment,” and researched the effects of pollution on sea turtles.

Phi Theta Kappa is an international organization established to recognize the academic achievement of two-year college students, and to provide opportunities for personal growth through leadership and service. Del Mar College received its PTK charter in June 1937. However, this chapter has had a long period of inactivity.

“Phi Theta Kappa was very inactive for the past 10 years,” Mireles said. “Our adviser, Dr. Tammy Donaldson, kind of picked it up, and we just rolled with it. We started from nothing in August of 2014, and ever since then, we’ve just been working to recruit members and to become more active.”

The Gamma Sigma Chapter recently reached the 5-star level of the PTK 5-Star Chapter Plan. This plan reflects the ideals of Phi Theta Kappa and is used to help chapters improve themselves and to help them gain recognition.

During the Texas Regional Conference, Gamma Sigma received the Milestone award. This award is given to the chapter that reached a significant milestone during the preceding year. Because the Gamma Sigma Chapter was able to revive itself after its extended inactivity, ultimately reaching the 5th level of the 5-Star Chapter Plan, it was the only chapter selected to receive this award.

As part of this project, Gamma Sigma members co-authored a 10-page research paper on their findings. The paper also includes information about the society members’ development in leadership.

Gamma Sigma’s next project will focus on community involvement.

“We haven’t decided which exact project we want to choose, but with our 5-star status, we have to be active in the community,” said Robert Robertson, Gamma Sigma vice president of services. “We just want to get a head start on that, and we have several options.”

The society’s next project will be discussed and determined at their next official meeting. This meeting will be at 2 p.m. March 25 in Room 429 of the White Library on East Campus, and is open to both members and nonmembers.

Gamma Sigma hopes to expand its membership this semester, as it will soon be losing some of its members upon graduation.

“All of our officer positions will be open this May,” Mireles said. “We’re looking for new officers. We want people who are motivated and ready to work as a team to create something in our community and our school that people can remember.”

The society hopes to see continued success throughout its upcoming years, and hopes to maintain its current 5-star level status.

“It would be terrible if we just went from zero to five stars, then back to zero simply because we don’t have anybody to complete the goals that we’ve set,” Robertson said.

Members of Phi Theta Kappa must be invited to join, and must have a 3.5 GPA. However, the society does accept provisional members, which allows non-official members to be involved and active until they reach the required GPA.