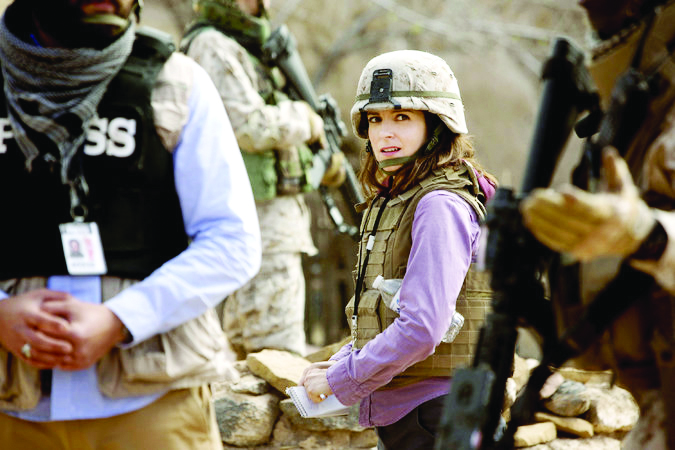 “WTF,” otherwise known as “Whiskey Tango Foxtrot,” is an intriguing and fun film that takes place during the war in Afghanistan from 2003-2006. Based on true events, the film was adapted for the screen from the book “The Taliban Shuffle: Strange Days in Afghanistan and Pakistan.” The author, Kim Barker, wrote the book from her own experience of reporting on the war overseas as a journalist at that time and poured in some humor along with her commentary.

Upon reading this book, Tina Fey, who plays the lead role as Barker in the film, took the idea to Lorne Michaels straight away, asking if they could possibly co- produce this story into a movie. Fey also asked her television partner of many years, Robert Carlock, if he would be interested in writing the screenplay for it as well. Fortunately for Fey, that’s exactly what happened and “Whiskey Tango Foxtrot” was born.

Directed by Glenn Ficarra and John Requa, who are known for movies such as “Bad Santa” and “Focus,” this war zone comedy is centered around a female lead looking to change up her monotonous routine who goes overseas to report on the war in Afghanistan for the newspaper she works for, becoming a foreign correspondent.

Barker takes the new assignment in Kabul, Afghanistan, confronting a new country affected by a war, but also an environment filled with complicated cultural behavior, not only with the traditions or people of Afghanistan, but within the journalism culture itself. Barker is immediately introduced to her translator, or guide, Fahim Ahmadzai, played by Christopher Abbott and flung into this out-of-control lifestyle.

Once in this world, Barker learns how things operate as a foreign correspondent with Tanya Vanderpoel, played by Margot Robbie, showing her the ropes so to speak. Ian Mackelpie, who is played by Martin Freeman, better known for “The Hobbit” or “Sherlock” series, plays a Scottish photojournalist who has also been a part of this lifestyle for some time and becomes one of Barker’s companions.

Barker finds herself working alongside the military in this environment and helps give a glimpse into not only what the military encounters in war zones, but the press as well. There is a struggle individually and in each other’s own circle. Gen. Hollanek (Billy Bob Thornton) is in charge of missions Barker is a part of and becomes a trusted ally.

Initially committing to only three months overseas, Barker remains there for three years.

The adrenaline-fueled lifestyle catches up to Barker and is an eye-opening and transformational experience.

A theme that I also see emerging in film is strong female leads. Many films have been or are coming out lately that are centered around a female lead and I for one am enjoying the trend. As a woman and a journalism/broadcast major myself, the trailer for this movie appealed to me immediately and the movie itself did not disappoint.

Fey succeeded in a more serious role, although still comedic, as Barker. Given Fey’s roles in the past on “Saturday Night Live” and other comedic performances, I wasn’t sure what to expect.

However, she surprised me in this role and I am now a fan of Fey’s more than I thought I would be. It makes me question if this will open the door for her to do similar projects in the future, where we might see a more serious Fey.

Overall, this film has a great balance of drama with plenty of humor to lighten the mood. It is entertaining, inspiring, funny and a feel-good movie for audiences to enjoy.

Sarah Fecht is a photographer/reporter for the Del Mar College Foghorn and has been on the staff since Spring 2014. She is a double major in Journalism/Radio and Television and plans to pursue her bachelors after graduation. You can reach Sarah at sfecht@foghornnews.com or follow her on Twitter @Fecht08.