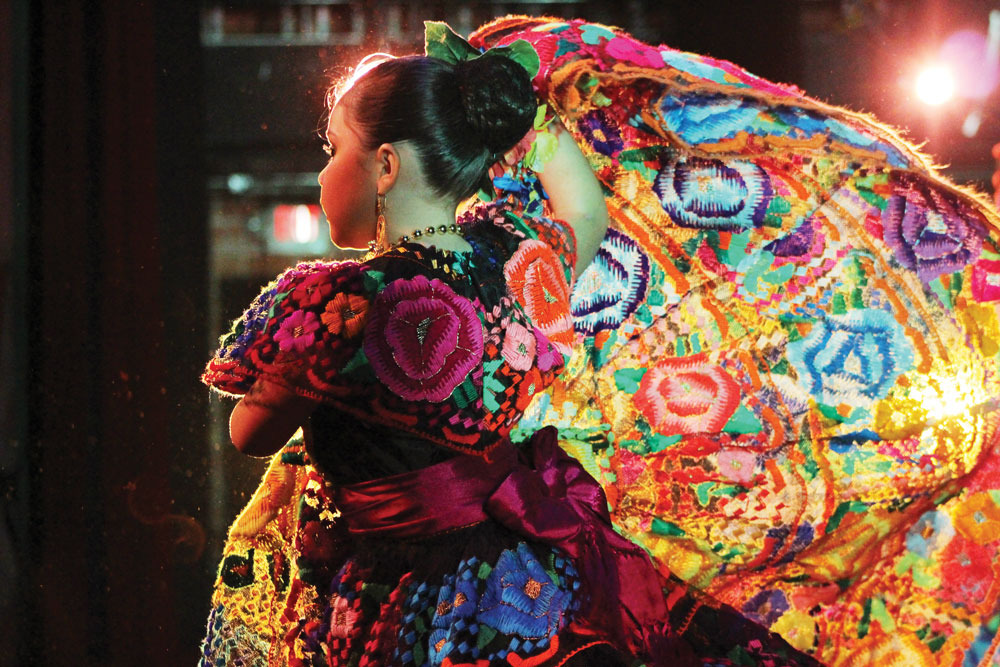 Dancers lined up backstage in their finest costumes as they prepared to walk on the dance floor in front of a crowded auditorium.

Many wore colorful Jalisco dresses layered with exquisite ribbons while the men wore their classic charro ensembles topped with decorative sombreros. These dancers changed quickly from outfit to outfit several times throughout the evening so they could show off and perform the sets they practiced all year.

Samuel Alcorta, instructor of Alcorta’s Folklórica, yelled to the dancers backstage at Richardson Performance Hall on April 8: “Tamaulipas, you’re up after this next set. Hurry up and change!”

Inovidable is the yearly anniversary production for Alcorta’s Compañía de Danza Folklórica. Each year, the company puts on two shows to demonstrate to the public the many dances they learned in the past year. The first show is a free show to the local schools to help invite young people to strike an interest in folklórico, while the second show is a paid matinee for anyone in the community interested to see. This year’s Inovidable marked the 19th anniversary for the company.

The company visually presented various skits about the regions from an Otomi wedding to the Mexican Revolution of 1910. Each costume worn by the various dancers helped transport audience members to the past, for the costumes represented the culture of the region they performed.

There were 36 dancers who helped put on the show, accompanied by a group of musicians known as Ensemble Folklórico de Veracruz. The musicians had a unique sound and were not from the Coastal Bend, but from the beautiful state of Veracruz, Mexico.

“Every year I go to Mexico to visit the culture and this year I went to Veracruz and found these lovely musicians who had a unique sound. I asked them to come to the United States to perform for a show and they agreed and we couldn’t have put on a great show without them,” Alcorta said.

Alcorta’s began as a local high school folklorico dance group, but as the group learned more about Mexican folklorico, they felt the need to continue learning of Mexico’s rich heritage and share their knowledge and experience with the younger generations, giving them an opportunity to learn about their heritage while engaging in a healthy activity. With this, Alcorta’s was established in 1997 under the direction and founder Cynthia Alcorta.

Once Samuel Alcorta Jr. was old enough, Cynthia Alcorta handed the torch to her son to take care of the business.

Alcorta started dancing in his mother’s group at a young age and was able to learn first-hand the importance of folklórico dancing.

“Here in South Texas there are other types of dances that are more predominant such as jazz, ballet, tap and modern lyrical. However, those types of dances originate from folk dance that was just refined,” Alcorta said. “I love folk dancing because there is actual purpose and meaning behind every move. Instead of just illustrating a story on stage through body movement, you are representing an ethnic group and certain people. Your job as a folklórico dancer is to transport those people to that community.”

“The definition of folklorico dancing literally translates to dances of the people. In terms of Mexican folklore, it is an expression of the different cultures, customs and traditions of the Mexican people in terms of dance reflected on to stage,” Alcorta said.