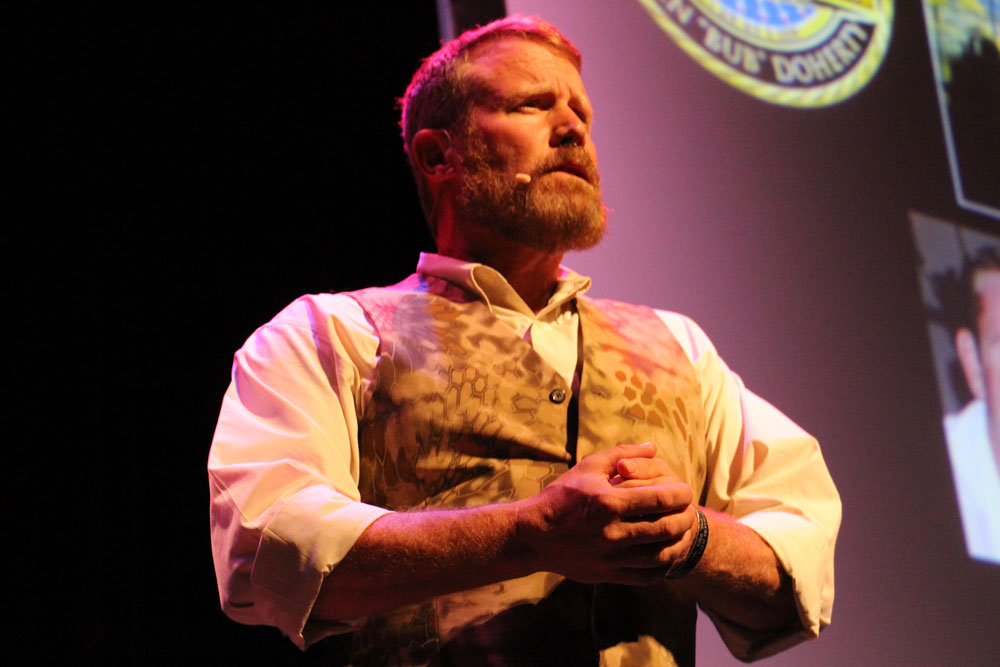 As Mark Geist was running for cover, he could feel the burning and piercing sensation of the shrapnel in his body slowly getting deeper with each hurried motion. It was in this moment that Geist knew he was fighting the battle of his life.

Geist had the audience in Richardson Performance Hall nearly at the edge of their seats as he shared his riveting first-hand account of what happened in Benghazi in September 2012. Geist visited Del Mar College for the April 6 Nueces County Republican Women’s monthly meeting.

“For us, it was like any other night because every day for us was like 9/11,” Geist said.

Geist was a member of the annex security team that fought the battle of Benghazi during the days of Sept. 11-12, 2012, in Libya. He is the co-author of the bestselling book, “13 Hours: The Inside Account of What Really Happened in Benghazi,” and served as an adviser for the movie of the same name.

Mark Geist talks about his stories from the battle of Benghazi on the days of Sept. 11-12, 2012, in Richardson Performance Hall.

He has been credited with helping save the lives of more than 25 Americans, and is still recovering from injuries suffered during the battle.

“I think that everybody needs to hear this story,” Geist said. “It is not a story about politics it is a story about Americans saving the lives of Americans and doing what is right.”

Geist tells his story for a reason. It is not to politicize the events about what happened, but to share with the community what they can learn from the events of Benghazi, he said.

The event was organized by the Nueces County Republican Women’s Club.

“The event here was to help raise funds for the Republican candidate’s upcoming elections in the fall, but it was also to share the incredible account of Geist’s experience in Benghazi,” said Wendy Herman, President of the Nueces County Republican Women’s Club. “We all have our interpretations of what happened over there so it is important to understand the story from the man who experienced it himself.”

Geist’s visit at the club’s monthly meeting did more than just share his account, but gave the audience words of advice to take with them at the end of the day.

“We all face adversity in our lives and it is not whether we get knocked down it is about whether we get back up and what you do after that,” he said. “Everybody is going to lose in their lives in some manner or another but if you don’t have the fortitude and the strength to get up and keep fighting and keep moving forward then that is where we lose our essence of who we are. I hope that people can find from the inspiration of what we did and how we reacted in those situations that they can draw from that and gain from it.”