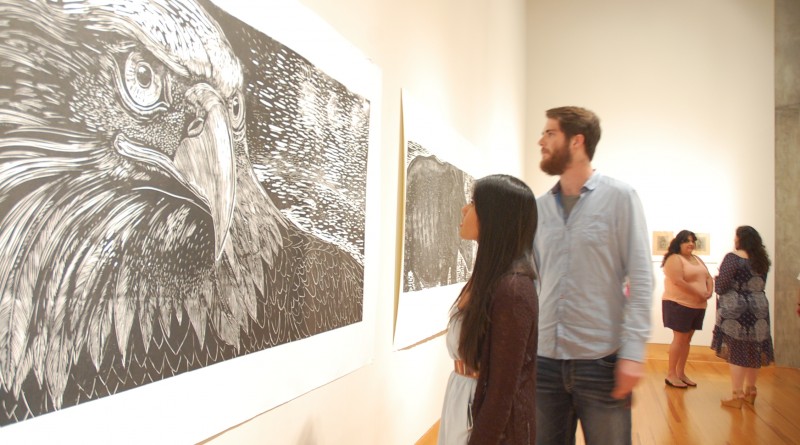 The Printmaking Invitational show kicked off in the Cain Gallery Sept. 16 with an opening reception. Professor Amorette Garza of the Art Department praised the show for providing examples of the diverse world of printmaking and the variety of processes used to make them.

“There’s not only woodblock printing, but intaglio and lithographs as well,” Garza said. “There’s also a large variety of subject matter — there’s people and animals and geometric shapes.”

The exhibit displays art from prominent printmakers from across the country, including current and past judges for Del Mar’s National Drawing and Small Sculpture Show. The size and scale of many of the pieces are breathtaking, from images as small as postcards to a series of four woodblock prints that spreads over 30 feet along one gallery wall.

“I kind of think of it as one big design project,” Randy Flowers, co-curator of the event, said of how he decided to hang such a variety of pieces, in both size and subject. “I tried to keep each artist’s work grouped together. The first thing I looked at is the orientation of the pieces, whether they are horizontal or vertical. … I alternate between them. Second, I look at size. … Third, I look at the colors, whether it’s all in black or white, or if it’s polychromatic like some of the pieces in the show. And then the last thing I look at is subject. Once it’s all up, if anything clashes … well, I just move it so it doesn’t clash.”

The result is a show that provides a look into the world of different printmaking processes and the artists who embrace them. The Printmaking Invitational will be on display through Dec. 2 in the Joseph A. Cain Memorial Art Gallery in the Fine Arts Building on East Campus. Admission is free.