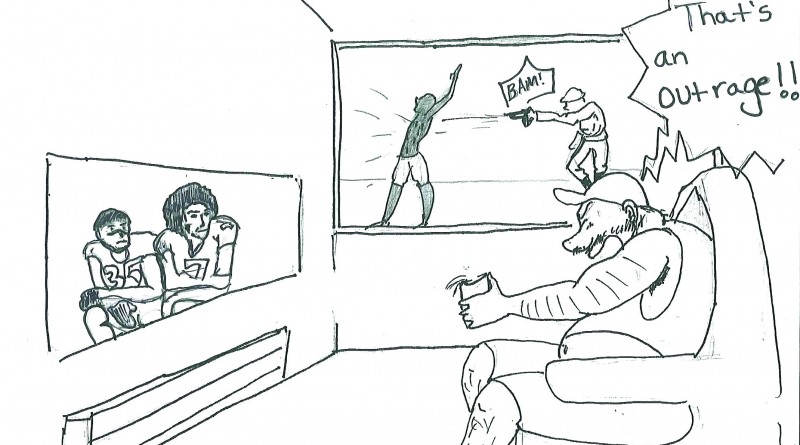 In August, football player Colin Kaepernick made headlines by not standing during the national anthem, and now with other athletes joining him in his protest, he’s became famous, and infamous, for his peaceful protest.

While Kaepernick claims that he’s not trying to be “anti-American” or disrespectful, there’s been a national outrage saying the exact opposite. Kaepernick, however, has held his stance despite obvious blows to his image, saying: “I have great respect for the men and women that have fought for this country… they fight for freedom, they fight for the people, they fight for liberty and justice, for everyone. That’s not happening.”

He’s made it clear that this show is to bring light to issues involving race, America’s efforts for African-Americans and a lack thereof.

“I am not going to stand up to show pride in a flag for a country that oppresses black people and people of color,” Kaepernick said.

Now during games, we see other players joining Kaepernick and even holding fists up instead of just kneeling, alluding to the Black Lives Matter movement directly.

The NFL takes care not to endorse or reject certain viewpoints, but it can be hard to be seen as neutral when Kaepernick protests and receives no backlash but back in September of 2014, Kansas City Chiefs safety Husain Abdullah received an “unsportsmanlike” penalty for giving a quick prayer in the end zone after a touchdown.

Remember when Denver Broncos quarterback Tim Tebow was a hot topic for showing his religion in various ways during games? Tebow’s controversy resulted in a new “Tebow rule” that players could not draw messages on the black paint under their eyes after Tebow began to reference biblical verses on them.

The NFL recognizes that its players have a right to free speech, but the fine line between what’s appropriate on the field and what is not can be hard to see, and everyday people who are watching these games and seeing this go on certainly have their own raging opinions about what should be done to retaliate.

All these athletes received media attention and a backlash that affected their careers, but as public figures, they carry out actions and make choice knowing that there could be negative effects.

We have freedom of speech; the freedom to protest and the very people Kaepernick is “disrespecting” are fighting for his right to partake in his peaceful protest.

It’s their right to say whatever it is they’re trying to say.