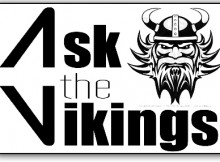 We asked a few vikings on how they feel about the recent protest in the NFL? Do they support the silent anthem protest? These are their answers.

“That’s not right. I think people have literally died so that we can stand up and pledge allegiance to our flag and our country.”

“I totally agree with him being able to do it but I think he’s dumb for doing it. It’s basically saying, ‘Man I don’t like this country.’”

“Some people are blowing it out of proportion, saying it’s racist but it’s not really. They’re just trying to make a change.”

“I mean it’s their right to do it. I’d rather stand for the anthem myself. Do I feel like they should find another way to protest? Maybe.”

“There have just been a lot of unnecessary killings around the United States and for the athletes to take a stand by not standing for the anthem, I think that takes real bravery. It’s making a difference since people are listening.”

Editors asked students and members of the community what they have learned from being in quarantine due to COVID-19.

Editor Leah Johnston asked students what was the worst thing they’ve found at one of the many beaches located around Corpus Christi.

Editor Leah Johnston asks students what they think about the $2 increase per credit hour for tuition.