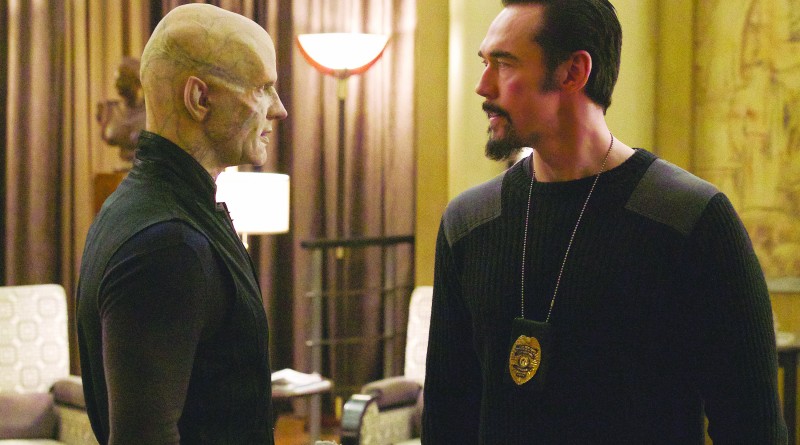 “The Strain” returned to FX for its third season Aug. 28. Based on the series of novels by Guillermo del Toro and Chuck Hogan, the show made its mark back in 2014 and has gained a following ever since. Despite having a strong last few episodes, the second season had some inconsistencies, anti-climactic conclusions and a season finale that had many people questioning the writing of that episode. Now on its third season, does this show make up for the sins of last season? With these last couple of episodes, this season is looking to be a very promising one.

New York City has fallen under the plague of the “Strigoi,” a legion of vampire-like creatures that can infect anyone who is hit by their stingers or squirt blood on their victims to spray them with parasitic worms. The outbreak is starting to spread beyond New York with Mayor Justine Feraldo’s (Samantha Mathis) attempts to fight off the Strigois have failed. Dr. Ephraim “Eph” Goodweather (Corey Stoll), who is helping Feraldo with a weapon to counteract these creatures, comes to a halt as he struggles to cope with the death of his assistant and his son Zach (Max Charles) being taken by his ex-wife Kelly (Natalie Brown), who has been turned into a Strigoi.

Professor Abraham Setrakian (David Bradley) has a supernatural book called the “Occido Lumen” after winning it from an auction against Eldrich Palmer (Jonathan Hyde) and his assistant Thomas Eichorst (Richard Sammel). This book contains the key to take down the Master (Robin Atkin Downes) and his army. Aided by Vasiliy Fet (Kevin Durand) and a Strigoi free from the Master’s control named Quinlan (Rupert Perny-Jones) must find out a key to defeat the Master once and for all. Things get complicated when Kelly offers Eph a chance to get Zach back in return for the Lumen creating a sticky situation.

The first couple of episodes do a great job of showing the aftermath of the outbreak. The city of New York is in a bad state as streets are abandoned and forces are struggling to fight back against this plague. The show’s action is directed very well as you can see what is going on in scenes without the use of shaky cam. The makeup team is to be commended as the work done on these Strigoi creatures look great and mixes well with the CGI for their stingers that come out of their mouths. Actors all do a great job in their roles although there is one weak link in the cast, which is child actor Charles.

Charles came in on the second season to replace Ben Hyland, who portrayed Zach on its first season, which confused viewers to see a change of actor the following season. Charles’ portrayal is very one dimensional as he seems to have a “stink face” every time he’s on screen and always appears to be annoyed. This makes it awkward because the scenes where he’s supposed to show another emotion besides anger just makes him the wrong fit for the role.

“The Strain” makes a strong promise to be a strong third season setting up a great payoff with each episodes to come. Check this out live when it comes on FX at 9 p.m. Sundays, with a 10 p.m. encore in case you missed it — or go on FX Now to watch the latest episode. And if you want to catch up on or are looking to start this series, the first and second seasons are streaming on Hulu.