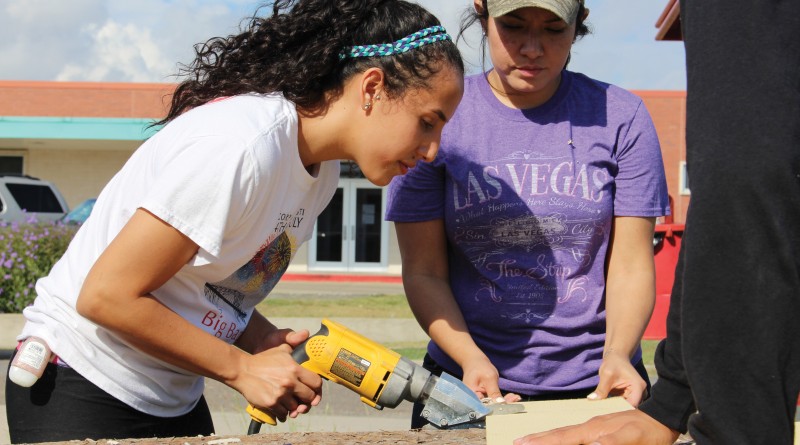 For the last year or so Del Mar College’s Architectural and Construction Technology Club has been helping Habitat for Humanity one Monday a month. Not only are they getting the hands-on training to gain experience in the industry they want to embark on, but they are helping build homes for families around the Coastal Bend.

Kimberly Delgado, president of the club, was one of at least a dozen members helping to build a house on Nogales Street on Nov. 7.

“It makes you feel good, like you’re doing it for somebody, you’re helping out somebody who needs it,” Delgado said.

Alongside students were their instructor, Jacqueline M. Carlson, and executive director of Habitat for Humanity, Barb Sweeny.

This is the 52nd house Habitat for Humanity has built in the Coastal Bend. The house on Nogales is provided in part by a grant from the Coastal Bend Community Foundation.

Habitat for Humanity has been here since 1989 and has averaged one to two houses a year, Sweeny said.

“That’s why partnerships like this with the Del Mar students has been p h e n o m e n a l , because it gets us volunteers on a regular basis on a weekday that have a skillset that’s very helpful and it’s a great partnership because the Del Mar students in turn get the hands-on experience while they’re going to school for architecture,” he said. “It’s been a win-win all around and it’s stuff like this that’s going to really work and make our program grow.”

Like the family selected for this home on Nogales, another mom, Pearl Rodriguez, 26, was on site putting in her “sweat equity.” The new soon-to-be homeowners must put in 300 hours of work on the home to qualify.

“My oldest son is excited,” said Rodriguez, a single mother of two boys who works at a hospital. “He has never had his own yard. I can’t let them go outside nowadays but with this they can grow up like children are supposed to grow up.”