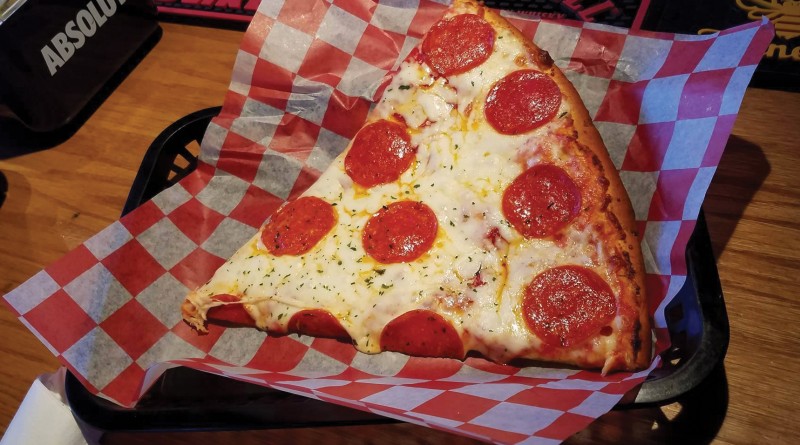 Crowds can be found at the House of Rock quite often enjoying fun acts and open mic nights that draw people in week after week, but surprisingly we had never tried the food that The Kitchen at House of Rock offers. Upon finding out about the “specialty pizzas,” among other things like soups and sandwiches that were all heavily Italian themed, we were eager as ever to give the place a shot.

The atmosphere at The Kitchen at House of Rock is, well, rockin’. There’s plenty going on to keep your attention on the walls, from pictures of performers to artwork to a drum depicting a “today in rock history” fact hanging on the wall. On the walls, you could find not only the menu, but also a list of performances set to occur at The Venue, a useful guide.

I went around 4 p.m. and the place was scarcely occupied, thankfully. After being greeted by a lovely bartendress, I ordered a combo that included a slice of pizza, either cheese or pepperoni, and a Caesar salad.  Along with my drink of Sprite, the meal ended up being $10.61, which seemed a fine price for a pizza that the restaurant claimed to be “made fresh, hand tossed and cooked on stones.”

When the pizza came out, I was greeted by a slice bigger than it had any right to be. It was set under a literal spotlight in front of me, and the pizza lover that lives in me gave a small fist pump of victory. From somewhere behind the bar I heard “be careful, it’s fresh and hot,” which I appreciated, because we all know pizza is best when piping hot.

However, it was not hot. Not at all.

I think I actually felt my soul slip down and settle at my feet when I picked up my pizza. Hard and lacking in almost all aspects, it was nothing like what I had been mentally preparing myself for. The dense crust was reminiscent of a DiGiorno, the cheese was already congealed and unappealing, sauce almost nowhere to be found and pepperonis being the only slightly redeeming quality … yikes.

I love pizza like no other, so I partially suspect that I ate it so naturally from muscle memory alone, or maybe the pressing obligation to not be rude by not eating it. I found myself thinking that I could have bought a frozen pizza for half the price and ended up with a whole pizza that had melty cheese and four other toppings of my choice.

The salad salvaged the meal. It was the perfect size with the perfect mix and amount of ingredients with a bomb, zesty dressing; I could definitely see myself ordering that again. It even gives me a sliver of hope for the remaining menu items, such as a sandwich or plate of meatballs.

I enjoy the location and plan to return for sure, but I will definitely keep this experience in mind when considering eating there. Perhaps I set my hopes too high, or went at the wrong time and received a slice that actually wasn’t fresh, but still.

“How do you like my balls in your mouth?” the server asked me as I took my first bite.  Surprisingly, I liked them a lot.

I had already heard of the House of Rock via Instagram, and saw several of my celebrity crushes (mainly pro wrestlers) fawn over the meatball sub, which contains Italian style meatballs (made fresh every day), soaked in tomato sauce and blanketed with mozzarella cheese.  The bread was warm and soft, with crisp edges, and the meal comes with a side of homemade potato chips.

Despite the rude introduction to the meal, I was extremely satisfied with the taste and texture of the food, and plan to go back as soon as possible to get my mouth on those tasty balls.