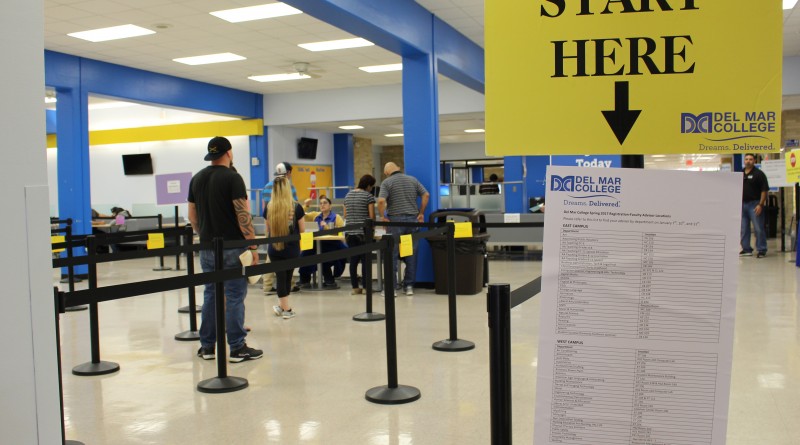 After several semesters of long lines and even some system crashes, students reported few headaches during spring registration, thanks largely to several steps Del Mar College has taken to ease the process.

“At the end of the fall semester we started to push for students to register for the spring semester sooner. This early push has made a noticeable impact on lines and made things go a lot smoother,” said Patricia Benavides-Dominguez, dean of Outreach and Enrollment.

While the added communication helped, so did some technical changes put in place by the college.

After a computer glitch during fall registration caused a slowdown for students registering both online and in person, Del Mar switched its systems to a cloud-based operation, which Benavides-Dominguez said made things go smoother this semester.

The college also held more rallies and events to help people register and made it more accessible, even adding a phone application for people to register. The extra efforts resulted in about a 5 percent increase in students registering this spring than in spring 2016.

Del Mar has also made a shift on how it alerts people, making robocalls one of the keys ways to reach students if they need to pay for tuition before the deadline. However, this system isn’t perfect; if Del Mar doesn’t have the correct information or the system skips over someone, it could lead to students having their classes dropped.

Communications major Armani Brooks said he was not alerted that his classes were going to be dropped.

“I tried to pay for them on the 2nd but I was having some issues. When I tried to call Del Mar, the offices were still closed,” he said. DMC offices reopened Jan. 4 after the winter break.

While incidents like this aren’t common, Benavides-Dominguez said Del Mar is constantly trying to make registering easier and more efficient. She says the best way to make sure it goes smoothly is to “plan ahead and know all the important dates. The Del Mar website has all the information and the Student Enrollment Center can help you in person. ”