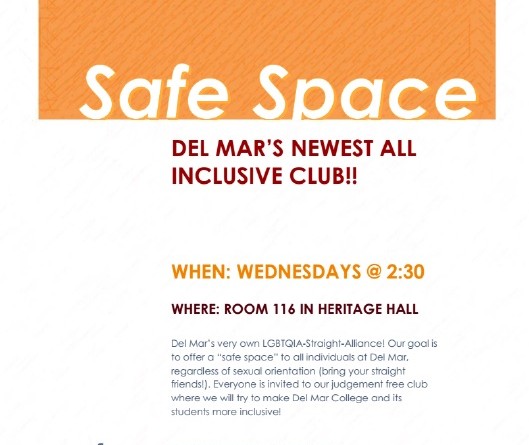 If I had a dime for every time I heard that horrendous phrase I’d probably have enough money to pay for my college books. Instead, I’m just a poor gay man who has to hear ignorant phrases.

In early fall of 2016, I attended a meeting focusing on LGBT issues at Del Mar for the Foghorn News. While I was pleasantly surprised at the inclusivity of Del Mar, I was upset at the fact that no one at Del Mar had started a club focused on the LGBT students. So, I decided to start one! Now before you use your brain too hard to think of whether Del Mar has a “gay” club, the answer is not yet. Life and all that fun stuff got me before I could start one, but in light of America’s current political climate, I figure now is the best time.

For LGBT Americans, there’s a lot to be frightened about. As reported by the Southern Poverty Law Center, a civil rights group, since Donald Trump was elected president over 900 hate-crime-related events towards minorities of all kinds have been reported. That report was released just 10 days after the election.

Even his vice president is notoriously anti-LGBT, having supported anti-LGBT laws and even “conversion therapy,” a medically disproven and incredibly harmful practice.

While this and many other things occurring in our society can be frightening, I hope that by starting a club that students of all shapes, sizes, colors, sexes, genders and orientations can come and feel like they aren’t alone. I have had my fair share of difficulties concerning my sexuality and while I’m fine (thanks for asking), others aren’t. Some people simply need to not feel alone.

The club, Safe Space, will be aimed at providing a safe environment for anyone on the LGBT spectrum (even the heteros!) who want to meet others in a judgment-free space. The first meeting will be at 2:30 p.m. Feb. 8 in Room 116 in Heritage Hall.