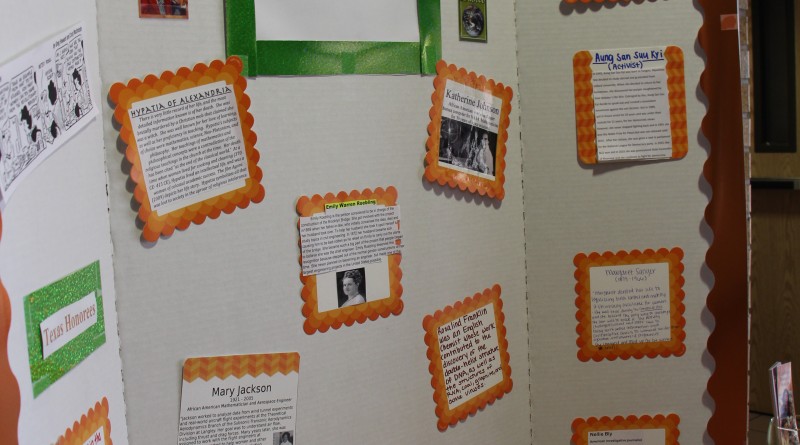 Poster Presentation for Womans Month, created by students in English class 2341. Located in the coloes building.

When Barbara Craig introduces students to lesser-known authors and poets in her women’s literature class, she does it for one main reason.

Each student in the class had to choose a woman they felt deserved to be honored by their achievements in the display. Erin Cohen, an English major, chose Pat Mora, a Texas local Mexican-American literature writer who has published many works, including children’s and young adult stories.

“I like her poetry. She definitely makes the whole dream as a writer a lot more real,” Cohen said.

There was no limitation as to who the students could choose. Jacob Garzia chose Catherine the Great, based on his interest for Russian history, and while she wasn’t Russian herself she ruled Russia temporarily and even led an uprising against her husband.

“She was one of the most influential women of Europe of her time,” Garzia. said.

While some students already had their choice in mind, others needed a little bit of help finding theirs.

“I Googled ‘notable woman through history’ and she came up,” Leamer said He discovered that Kwolek was an American chemist who worked at the DuPont company and the inventor of synthetic fibers of exceptional strength and stiffness better known as Kevlar, which is used for bulletproof vests and is five times stronger than steel.

Craig has been finding new ways to educate students about Women’s History Month since coming to Del Mar.

One year, students had to present a three-minute speech about a woman who affected them personally. Another time, students made a quilt and it was placed on display in the English Building.

For two years, Craig and Joy Kairies, professor of humanities and music, also held a weeklong festival for women’s creativity on both campuses that include contests, speakers, movies and activities day and night. “It was very successful,” said Dr. Craig.

This year’s display includes many other notable women throughout history. “Women who deserve to deserve to be famous but you wouldn’t know their name,” Craig said.

The display will to be featured in the lobby of the Coles building until March 31.