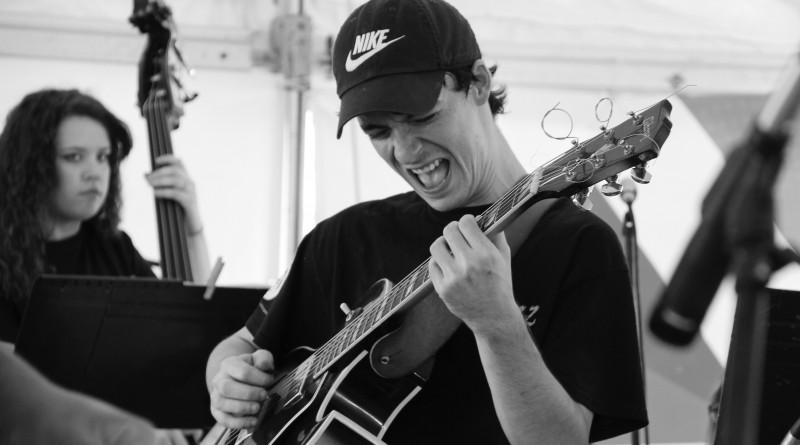 “Live jazz–just for the love of it”

When competing in a crowded music market, jazz music has decreased for most contemporary listeners, tying with classical as the least consumed music, after children’s music, according to Nielson’s 2014 Year-End Report.

Jazz and classical music represent 1.4 percent of the music consumption apiece. More classical albums were sold in 2014, pushing jazz to the very bottom.

However, fans find ways to keep the movement of jazz culture active.

In Corpus Christi, with the continuation of the annual Texas Jazz Festival, the community has come together to celebrate jazz for a three day weekend for the past 56 years.

“We have all walks of life at the Jazz Festival and it’s keeping jazz alive, which is part of our purpose,” Sanchez said.

The first Jazz Festival took place back in May 1960, with efforts the year before when Skip Vetters and Joe Gallardo, members of the Jazz Club at Del Mar College, called for Al “Berto” Garcia, Joe’s uncle, to show the club how significant jazz could be.

That Thursday night in 1959, Garcia and his jazz group played for a crowd of 150 people, unexpectedly setting the beginning of the Texas Jazz Festival.

Music being an integral part of society, Sanchez acknowledges that jazz is one of America’s true art forms.

“We just want to keep it alive,” Sanchez said.

The society presents jazz music free of charge each year showcasing “live jazz — just for the love of it,” as their slogan once said.

“We’re very proud of our jazz festival; it’s put on by nothing but volunteers … we put on the jazz festival for the love of it; It’s our gift to the community,” Sanchez said.

David Irving, Del Mar College professor of jazz ensembles, trusts in the Texas Jazz Festival to help in the support of jazz.

“An audience of 50,000 people come to the Jazz Festival for an education,” Irving said. “That even down here, which is not the hottest jazz mecca in the whole world, but we have a big audience for it.”

Irving participates with Del Mar Jazz Combos and the MWF Jazz Band in the festival, but Irving plans to retire in the summer of 2017. He still plans to be a bystander of the festival in awe of interest, saying “It’s been a big push for the jazz world.”

“Most of my adult life I have heard that jazz was dead, but if it were dead we would stop hearing things,” Irving said.

“The first music I ever heard, since I grew up down here was country, and I like that too, I like most kinds of music, but I just heard jazz on the radio and was really drawn to it,” Irving said. “I liked the way it sounded, I just liked what they were doing, and so I used to listen to it all the time.”

Jazz may be decreasing, but for high school and college jazz ensembles, it’s the most popular genre around.

Katarina Villarreal, flute player for Del Mar Jazz Combos, fell in love with jazz as a little girl while listening to jazz music in Italian restaurants, and she sees people getting more involved with the festival.

“I am in love with jazz. When we played in the Jazz Festival this year, it was amazing,” Villarreal said. “We get to see people in love with the things that you’re in love with.”

If you’re looking to attend the Texas Jazz Festival, this year’s swinging fest will take place Oct. 20-22 at Heritage Park.

The Del Mar MWF Jazz Band will be having a concert at 7:30 p.m. April 13 in the Richardson Performance Hall with the famous saxophonist Lou Marini.