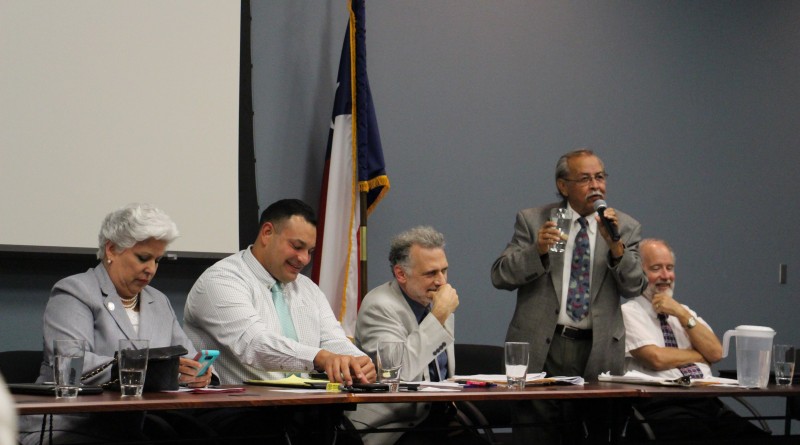 Six candidates for mayor of Corpus Christi discussed water issues at a March 23 forum at the Center for Economic Development.

The forum was hosted by the Clean Economy Coalition, For the Greater Good and the Sierra Club, and moderated by Del Mar Professor Jim Klein. It was attended by Nelda Martinez, a former mayor and businesswoman; James M. Hernandez, a local businessman; Mark Di Carlo, an attorney; Ray Madrigal, a veteran and former City Council candidate; Larry White, an engineer; and Joe McComb, a current City Council member.

The questions, which were given to the candidates beforehand, dealt with infrastructure, the reason for the water problems and industries in Corpus Christi that use the water.

The panel agreed that the water problems stemmed from infrastructure issues and that the pipes alone are over “70 years old” according to Martinez.

In discussing how to fix the water problems the panel asserted that the water would be a top priority if any of them got into office. However, they all had their own ideas on how to get it done.

Hernandez stressed how he will commission desalinization plants that he believes will greatly aid the water problem.

Di Carlo said he will build more water treatment plants to make sure everything is clean and safe. He also wants the people responsible for the previous water problems to be held accountable.

McComb said he would use the city’s money to make sure all the systems are running properly.

White wants to make sure all business regulations are up to the standard and says he “will not put industry ahead of citizens.”

Madrigal said he would look into the older pipes and replace all the ones that are suitable or satisfactory.

Martinez said she wants to make sure all the current problems will get fixed and that she wants to look ahead by making sure that the city protects its environmental “treasures.”

While the conversation varied at times, many of the talking points were the same, with each candidate assuring water would be their top priority if elected.

Del Mar student Abel Zaragosa Jr., a computer science major, said he was at the forum “because of all the issues with the last mayor. I want to be knowledgeable on the issues. I think a lot of people were oblivious and just wanted to get Nelda out.”

Rosemarie Evans, a studio art and biology major, joked that she “didn’t get a week to prepare” like the candidates, but that these issues are important and she appreciated the passion of the candidates.

Alyssa De Los Santos, a liberal arts major, said the forum was a great learning experience for someone who doesn’t know much about local politics and that “it’s important to stay informed.”