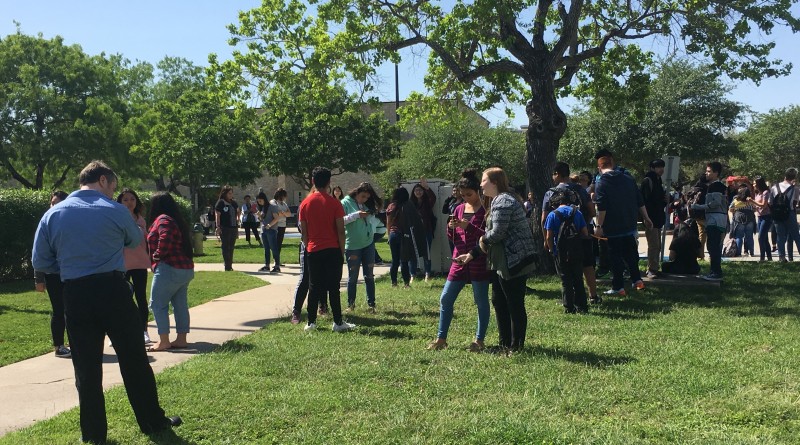 An overcooked bag of popcorn caused a fire alarm at Collegiate High School, releasing students and staff from the classrooms and out to the sidewalks. Where the 2017-2020 graduating students experienced their first evacuation during this alert, never having a drill before.

“We are on a college campus and in the past we had them on Fridays.” Serna said. “We have to follow Del Mar rules, it’s not like the other high schools that can say ‘we can have a fire drill,’ we can’t just do that.”

According to Jimenez, there are about one to two fire drills taking place every six weeks, “they can be quite boring waiting outside for a really long time,” she said.

Collegiate Freshman Victoria Gonzalez didn’t feel any danger from the evacuation, while staff members guided students down the stairs, “they told us what exit to go out and we had to get far away from the building,” Gonzalez said.

A fire drill, for most students, genuinely has little importance. Nonetheless, most people don’t have a real concept of fire prevention or a fire safety plan.

Corpus Christi Fire Chief Robert Rocha clarified that there are about 300 critical fire responses every year in Corpus Christi.

“We have around 300 structure fires a year in the city of Corpus Christi. Some are electrical, some are man-made,” Rocha said.

Overcooked popcorn is one of the leading causes of non-emergency fire alarms.

According to Rocha, teachers should take time at the beginning of the year to teach about fire safety.

“Whenever you start a new year, the teacher should go over the exits,” said Rocha. “If the lights go out and you have the streets down, you don’t know where you’re at, so if you know where you’re exits are that’s always a good sign.”

According to Rocha, the state mandates fire departments to inspect CCISD schools on an annual basis, which Rocha said every year “around October during Fire Prevention Week” the inspections take place.

Rocha said the most rememberable fire prevention tactic, as learned as a child in elementary school, and safest way to guarantee safety for all age groups is, “stop, drop and roll” when caught on fire.

Think of fire safety with more caution. Use these steps when needed: